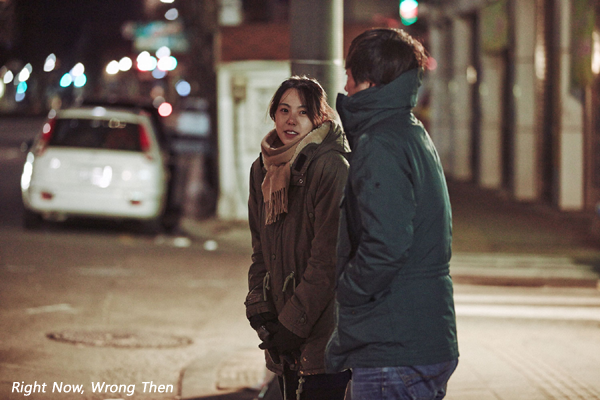 The Tokyo International Film Festival is gearing up for its 28th edition, which kicks off on October 22nd, and this year’s programming will include a brace of Korean films. HONG Sang-soo’s Right Now, Wrong Then and MUN Che-yong’s Shoot Me in the Heart are both invited to Tokyo this year.
The 17th feature from the prolific and acclaimed HONG, Right Now, Wrong Then debuted in August at the Locarno International Film Festival, where it became the first Korean feature to win the illustrious Golden Leopard top prize, while also earning the Best Actor accolade for star JUNG Jae-young.
The film, which features JUNG as an indie film director traveling to a town near Seoul to introduce his film at a film festival, also star KIM Min-hee (appearing in a HONG film for the first time), as well as HONG stalwart YU Jun-sang and rising star KO Asung, also appearing in the cineaste’s work for the first time. The film has proven successful on the circuit, having already screened at the Toronto, Vancouver, New York, Busan and Hamburg International Film Festivals, among others.
Repped by 9ers Entertainment, Shoot Me in the Heart is a youth comedy-drama set in a mental institute featuring popular young actors LEE Min-ki and YEO Jin-gu. It debuted in local theaters in January of this year. The 28th TIFF will run until Saturday, October 31st.
Any copying, republication or redistribution of KOFIC's content is prohibited without prior consent of KOFIC.
Related People Related Films Related Company Related News