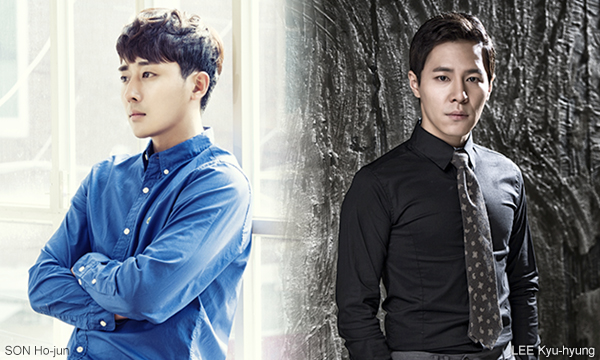 Actors SON Ho-jun and LEE Kyu-hyung will appear in the new fantasy comedy-drama Stellar (literal title). The project will be helmed by MY ANNOYING BROTHER (2016) director KWON Soo-kyung.
SON Ho-jun will appear as Yeong-bae, a top rental car dealer who inherits a car named ‘Stellar’ from this father, which he must use to track down a high-end supercar that was lost by his friend Dong-sik, played by LEE Kyu-hyung.
Though better known for his TV work, SON Ho-jun has nevertheless accumulated a range of roles in film, including the summer road trip comedy Three Summer Night (2015) and the MMA action-thriller Big Match (2014). Earlier this year he starred opposite the great KIM Hae-sook in the family drama A Diamond in the Rough.
Co-star LEE Kyu-hyung appeared in the trial dramas Innocent Witness and Juror 8 this year, and will soon be seen opposite SHIN Min-a in the diving drama Diva.
Director KWON scored a hit with his family comedy MY ANNOYING BROTHER with JO Jung-suk and DOH Kyung-soo, which welcomed close to three million viewers in late 2016. He previously helmed the drama Barefoot Ki-Bong (2006).
Stellar kicked off production on September 3 and is expected to find its way into theaters in 2020.
Any copying, republication or redistribution of KOFIC's content is prohibited without prior consent of KOFIC.
Related People Related Films Related News