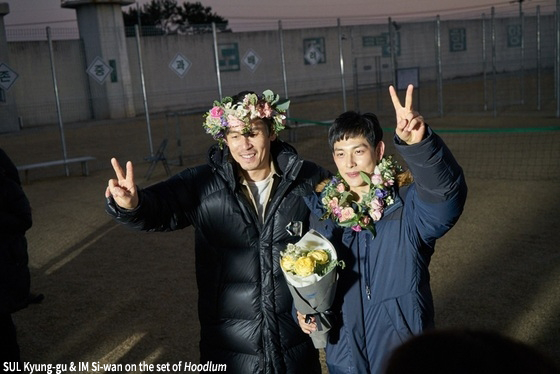 Incoming prison thriller Hoodlum (literal title) completed its four months production on December 10th. Financed by both CJ Entertainment and Barunson Media, the film stars veteran actor SUL Kyung-gu and newcomer IM Si-wan and marks the third directorial effort of BYUN Sung-hyun.
SUL plays Jae-ho, an inmate who sets the rules in a prison while IM co-stars as Hyeon-su, a young hooligan who arrives in prison but refuses to comply with the natural order.
Last year, SUL starred opposite another new face in the Korean War action-comedy The Long Way Home (2015) with YEO Jin-gu and the actor will next be seen in the thrillers Lucid Dream and Memories of a Murderer.
Member of the popular K-pop band ZE:A, IM made his big screen debut as a supporting actor in the smash hit drama The Attorney (2013) with SONG Kang-ho and was seen opposite KO Asung in the Korean War drama A Melody to Remember.
Joining the leads in the cast are Collective Invention (2015) actor KIM Hee-won, JEON Hye-jin of The Throne (2015) and Inside Men (2015) villain LEE Gyoung-young. Director BYUN’s previous films include the indie The Beat Goes On (2012) and the romantic comedy Whatcha Wearin’ (2012).
CJ Entertainment will release the film next year.
Any copying, republication or redistribution of KOFIC's content is prohibited without prior consent of KOFIC.
Related People Related Films Related Company Related News