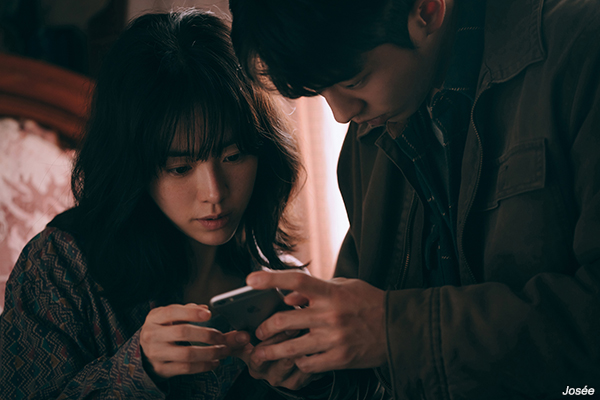 Josée, a romantic drama starring NAM Joo-hyuk and HAN Ji-min and the highly anticipated commercial film debut of arthouse director KIM Jong-kwan, has scored several international sales and will screen across Asia this month.
A remake of the Japanese drama Josee, the Tiger and the Fish from 2003 and new adaptation of TANABE Seiko’s short story of the same name, Josée debuted in both its native Korea and Singapore on December 10, before opening in Taiwan the following day. A week later on the 18th, it will welcome viewers in Vietnam, with Indonesia to follow on the 23rd and Hong Kong after that on the 31st. Beyond these confirmed release dates, the film has also secured distributors in Canada, China, Japan and the United States.
The story focuses on a romance that develops between a college student looking for his post-graduation job and a woman in a wheelchair who dreams up tall tales and calls herself Josée, after one of her favorite literary characters. Playing the student is the rising superstar NAM Joo-hyuk, who was seen this year in the Netflix drama The School Nurse Files with JUNG Yu-mi and the tvN drama Start-Up alongside BAE Suzy. Playing the title character is HAN Ji-min, who earned a slew of accolades for her leading role in the hit indie drama Miss Baek (2018).
Director KIM is known for his memorable shorts as well as several feature outings, such as Worst Woman (2016) and The Table (2016) and last year’s Jeonju Cinema Project Shades of the Heart. He collaborated earlier this year with JANG Kun-jae on the omnibus Vestige, which debuted at the Busan International Film Festival.
Any copying, republication or redistribution of KOFIC's content is prohibited without prior consent of KOFIC.
Related People Related Films Related Company Related News