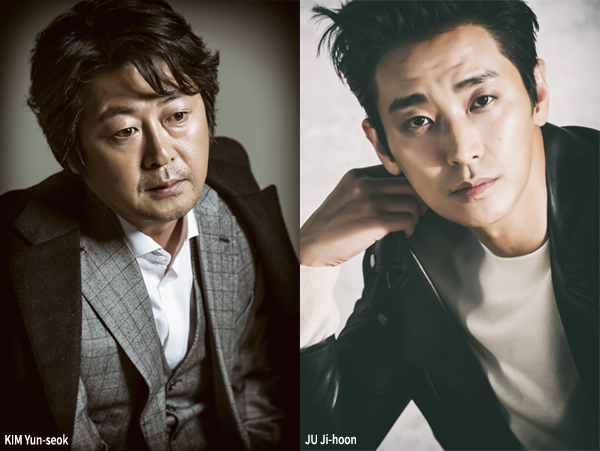 Seasoned actor KIM Yun-seok has teamed up with JU Ji-hoon for the upcoming thriller Murder of Man or Woman (translated title). KIM Tae-gyun will grasp the megaphone for the second time and will work from a script which he co-wrote with director KWAK Kyung-taek.
The film follows the face-off between a detective (KIM Yun-seok) and a killer (JU Ji-hoon) who confesses to seven more murders while behind bars. Filming kicked off in Busan on August 14th and the film is expected to be released next year. The Korean title, Am-soo-sal-in, is the term used to describe a murder case without a body or identified victim.
With several hits under his belt, including The Chaser (2008), The Thieves (2012) and The Priests (2015), KIM is angling for another hit next month alongside LEE Byung-hun and PARK Hae-il in the period battle film The Fortress, which will be released during the Chuseok holiday. He’s also teaming up with HA Jung-woo once more for the 80s-set political drama 1987.
Last seen in KIM Sung-soo’s Asura: The City of Madness (2016), JU has a pair of major films on the way, the two-part fantasy blockbuster KIM Yong-hwa’s Along with the Gods and YOON Jong-bin’s North Korea action-thriller Black Swan.
Director KIM Tae-gyun worked as an assistant director on several early KWAK Kyung-taek films and made his feature filmmaking debut in 2012 with the melodrama Spring, Snow. Meanwhile scriptwriter KWAK last helmed the thriller The Classified File (2015), which featured KIM Yun-seok, and his next film RV: Resurrected Victims is awaiting release.
Any copying, republication or redistribution of KOFIC's content is prohibited without prior consent of KOFIC.
Related People Related Films Related News