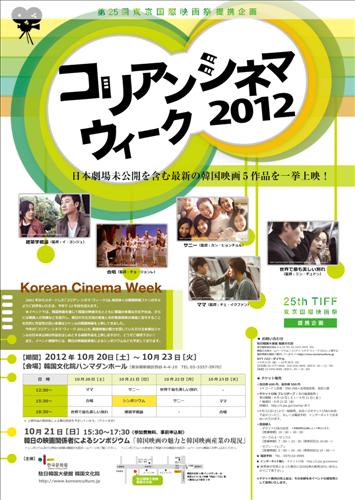 ‘Korean Cinema Week 2012’, which has established as a Korean film festival in Japan, will be held at Hanmadang Hall located on the 2nd floor of Korean Cultural Center in Tokyo for 4 days from October 20th to 23rd. Korean Cinema Week is an annual Korean film festival co-hosted by Korean Cultural Center of Korean Embassy in Japan and the Tokyo International Film Festival. Since it started in 2001, it has received favorable reactions by focusing on Korean films that are popular in Korea yet not introduced in Japan.
At the 12th edition of the festival, Architecture 101 starring UHM Tae-woong and HAN Ga-in, DURESORI: The Voice of East, a film about a chorus by Korean classical music students, Sunny directed by KANG Hyoung-chul, which sold 7 million tickets in Korea, Mama starring UHM Jung-hwa and KIM Hae-sook, and The Most Beautiful Goodbye directed by MIN Kyu-dong based on a novel written by NOH Hui-gyeong will be screened.
Korean Cultural Center will prepare for on-stage greetings and hold a symposium entitled ‘Charm of Korean Film and Current State of Korean Film Industry’, which film related people from Korea or Japan will attend at.