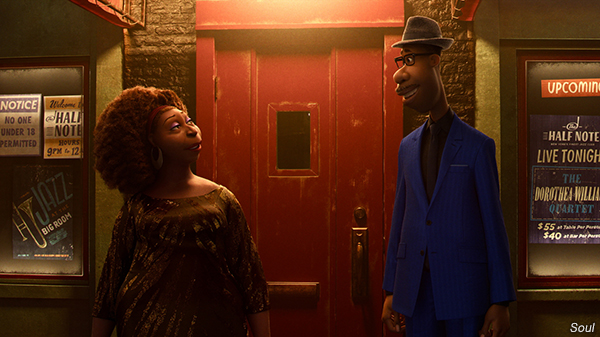 Despite social distancing restrictions affecting cinemas still being in place, business remained relatively strong and was once again boosted by animated films that were able to draw in daytime crowds. Admissions were more-or-less flat with the previous session at 426,000 sales, while the local market share remained low at 4% in the absence of major new releases.
Claiming its third first-place finish was Disney-Pixar’s Soul, which slowed just 28% as it welcomed another 201,000 viewers (USD 1.73 million). The universally acclaimed film has now welcomed 1.21 million spectators (USD 9.91 million), an impressive number in the middle of a pandemic, especially since theaters have had to close by 9 pm during its entire run.
After its solid debut last week, the Japanese anime sensation Demon Slayer the Movie: Mugen Train, Kimetsu no Yaiba: Mugen Ressha-Hen (now Japan’s highest-grossing film of all time) saw its fortunes rise at the box office as its weekly take gained 32%. The film added 136,000 entries (USD 1.2 million) over the weekend, raising its total to 443,000 admissions (USD 3.68 million) to date.
The latest Liam Neeson action-thriller vehicle, Honest Thief, debuted in third place with 34,000 sales (USD 281,000) over the three-day weekend, with 55,000 tickets (USD 430,000) sold since its Wednesday launch.
Despite being well-received by critics and viewers, the local indie Three Sisters suffered a 67% drop in its second weekend, during which it welcomed 9,000 viewers (USD 71,000). Nevertheless, with 64,000 entries (USD 485,000) counted so far, the film has performed well for a low-budget release.
WONG Kar-wai’s 1998 classic Happy Together returned to theaters and brought in 8,000 spectators (USD 69,000) over the weekend, pushing its lifetime total to 18,000 admissions (USD 126,000).
With the Lunar New Year holiday coming up this week, ordinarily, this would be a very busy time at the box office, but with tough social distancing guidelines still in place, local distributors remain cagey and only a handful of mid-tier releases are taking a chance. Those include HONG Ji-young’s ensemble romantic comedy NEW YEAR BLUES, which is currently topping the reservation chart, and the KIM Hyang-gi-led family drama I.
Any copying, republication or redistribution of KOFIC's content is prohibited without prior consent of KOFIC.
Related People Related Films Related News