Jan 14, 2019
Local Fantasy Comedy INSIDE ME Opens in a Close Second 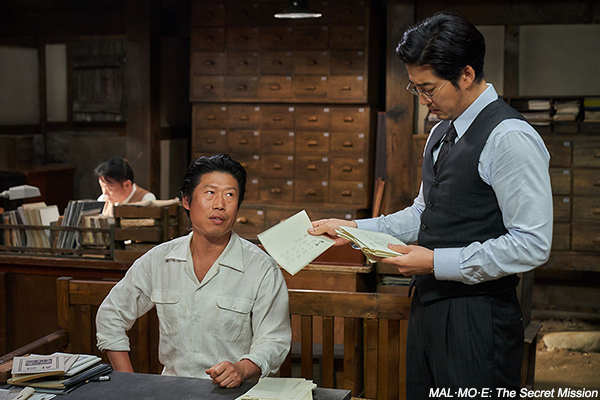 Admissions jumped up 20% to 2.35 million as a pair of local titles claimed the top two spots and the local industry a strong 69% market share, its first majority share in a month.
The first Korean film to top the charts in 2019 was the period drama MAL·MO·E: The Secret Mission. Featuring YOO Hae-jin and YOON Kye-sang, this directorial debut from A Taxi Driver (2017) scribe EOM Yuna bowed with a solid 786,000 viewers (USD 4.81 million) to claim first place and has already accrued 1.19 million entries (USD 7 million) in its first five days (including previews held the previous week). Given the strong response from viewers, the film has every chance to build a strong audience for itself throughout the month.
Opening not too far behind was the local fantasy comedy Inside me with 565,000 spectators (USD 3.48 million) over the weekend and 765,000 tickets (USD 4.62 million) sold since Wednesday. Though it has some room to play until the Lunar New Year releases arrive, it will be a tough race with current number one, which appears to be growing its lead.
Slipping two spots and 50% was the US animation Ralph Breaks the Internet, which added 316,000 entries (USD 1.79 million) over the weekend and has now been seen by 1.34 million viewers (USD 7.46 million). The latest feature in the local animated series Dino Mecard opened just behind that in fourth place with 231,000 sales (USD 1.26 million) over the weekend and 290,000 admissions (USD 1.56 million) over four days.
Falling three spots as it lost 62% of its audience was the DC Comics tentpole Aquaman with another 182,000 entries (USD 1.16 million), giving it a roast 4.92 million admissions (USD 29.99 million) so far as it wraps up its run.
This week will see the local animation Underdog and the European Wartime drama Kursk open wide a week before the upcoming holidays begin their assault on their charts.
Any copying, republication or redistribution of KOFIC's content is prohibited without prior consent of KOFIC.
Related People Related Films Related News