Following the busy holiday season earlier this year, the frenzy at the box office abated somewhat in late February and early March. However, the top five spots were still very crowded, with three foreign and two local productions hovering around the one million admissions mark for the fortnight. Early 2014 hits Frozen and Miss Granny remained in the mix and though their dominance has eroded, they both hit significant milestones in the last week.
Leading the fray by a thin margin was the effects-heavy swords and sandals pic Pompeii, which drew 1.20 million admissions in two weeks. The Paul W.S. Anderson film posted a solid 463,596 admissions debut and is now currently tracking second on the daily chart. Despite heavy competition from a new Hollywood thriller this past weekend the film managed to hold on to most of its audience. The period action film’s success follows similarly-themed works such as 300 (2006 - 2.93 million viewers) and Clash of the Titans (2010 - 2.64 million), which have also performed well in Korea.
Opening on the same weekend as Pompeii, CJ Entertainment’s local thriller Tabloid Truth was a close second with 1.09 million tickets sold. Its 442,234 admissions debut last weekend was just shy of first place. Though it received a positive reaction from critics, the film, starring KIM Gang-woo, has failed to ignite the larger interest of the public despite a topical subject surrounding corruption in the media, entertainment industry, big business and politics. 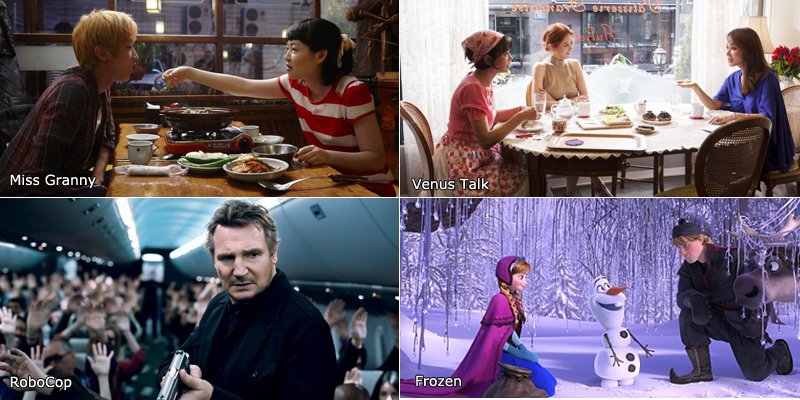 After six weeks on the charts, CJ’s Lunar New Year hit Miss Granny is still going strong at number three, having added 1.02 million tickets. The family comedy has now recorded over 8.26 million admissions. HWANG Dong-hyuk’s film was the most popular of this year’s crop of Lunar New Year releases.
The next Korean film to chart was KWON Chil-in’s Venus Talk at number six. Starring UHM Jeong-hwa, MOON So-ri and CHO Min-soo, the frank, middle-aged female sex and love comedy added 254,761 tickets to its disappointing 744,899 admissions total. The film appears unlikely to eclipse the one million mark at this rate.
At number four after only a week on release was the Liam Neeson action-thriller vehicle Non-Stop, which flew to 1.02 Million admissions in seven days following a convincing first place finish over the weekend. The film’s performance follows the recent success of other Liam Neeson films in the country, such as Taken (2008 – 2.36 million viewers) and Taken 2 (2012 – 2.31 million viewers).
After seven weeks on the chart, Disney’s animation Frozen still managed to stay in fifth place, adding 907,225 more viewers in the process. This past weekend the hit film became only the second non-Korean feature to breach the ten million admissions mark. It achieved this the same day that it cracked USD 1 billion worldwide. Outside of the US, Korea, where the film has earned over USD 76 million, has been the film’s more profitable territory.
In limited release, the Coen Brothers’ Inside Llewyn Davis was still the top draw, adding 12,260 viewers to its tally which now stands at 102,473, an impressive sum for a small release. Just behind was the Japanese drama The Great Passage, which pulled in 8,683 spectators for a total of 10,117. 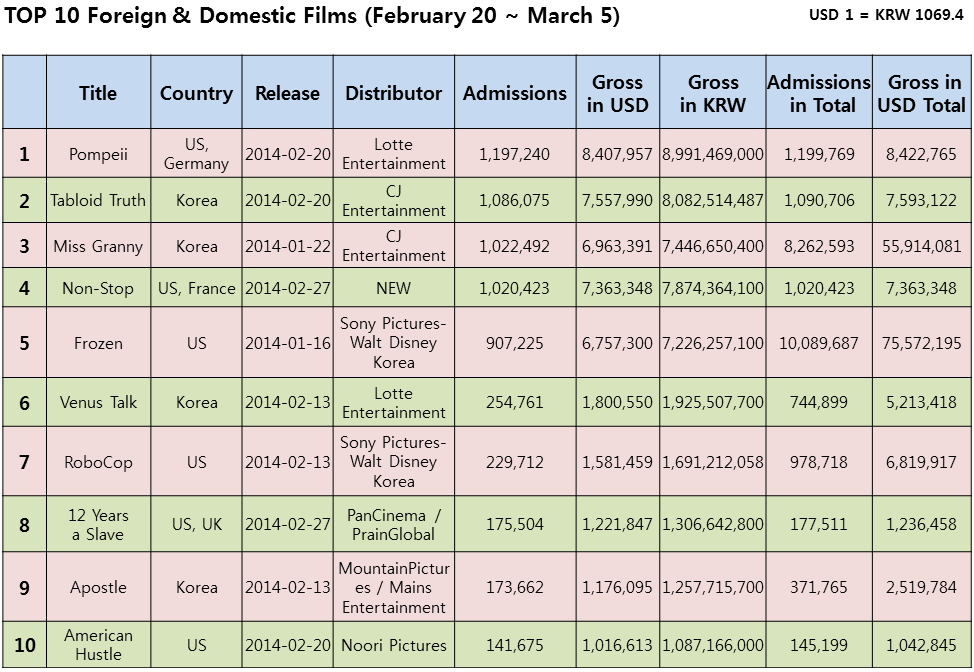 By Pierce Conran
Any copying, republication or redistribution of KOFIC's content is prohibited without prior consent of KOFIC.
Related People Related Films Related Company