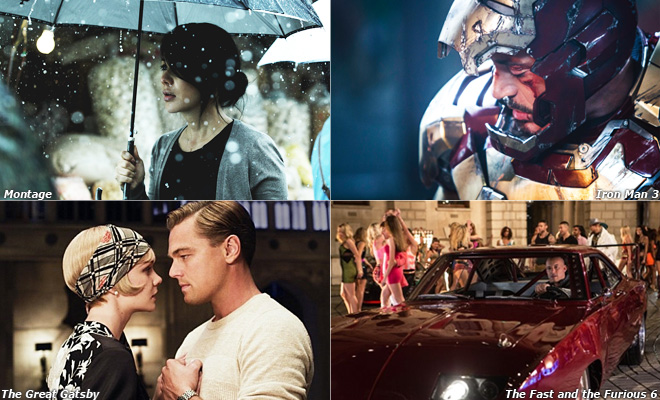 Several different films divided the spoils of the late May box office in Korea, with the new Korean thriller Montage edging out its Hollywood rivals to take the #1 slot. In the two weeks since its release on May 16th, the film has sold a total of 1,554,545 admissions. The work of first-time director JEONG Keun-seob, Montage centers around a series of events that take place exactly 15 years after the tragic kidnapping and murder of a young girl. With the statute of limitations about to run out, the girl’s mother (played by UHM Jeong-hwa) and the detective originally assigned to the case (KIM Sang-kyung) try desperately to determine the identity of the criminal and finally bring him to justice. Although not a runaway hit by any stretch, Montage is receiving a boost from positive word-of-mouth among viewers.
In the #2 slot, Iron Man 3 continued to sell significant numbers of tickets in its fourth and fifth weeks on release. After adding another 1,189,174 tickets, the film’s impressive total stands at just under 8.9 million admissions. The film currently ranks as the second highest grossing Hollywood film of all time in Korea. Nonetheless, it appears certain that the all-time record held by Avatar with 13.4 million admissions will remain unchallenged.
Debuting at #3 was Baz LUHRMANN’s new adaptation of the literary classic The Great Gatsby. Although opening very strongly on its first couple days, the film lost some momentum and amassed 1,157,820 admissions in two weeks. By contrast, the special effects-heavy The Fast and the Furious 6 managed to sell almost as many tickets (1,059,874) in the single week since its May 22 release. Then there is a considerable dropoff before the #5 film, animated children’s feature The Croods, which took 498,957 admissions over the two-week period.

There was only one other new Korean film in this latest chart, a comic drama called Happiness for Sale. A debut feature from director JEONG Ik-hwan, the film stars CHOI Gang-hee and BONG Tae-gyu in a story about a young woman who takes over a small stationery store from her sick father, and decides to sell it off. In two weeks on release the film has taken 302,714 admissions to place at #7. Another Korean film Born to Sing added 102,204 tickets in its third and fourth week to bring its overall total to 963,800 admissions. The film stars KIM In-kwon as a man who harbors a secret dream to become a singer, and who without telling his wife, begins preparing to enter a nationwide televised singing contest. It is directed by LEE Jong-pil, who previously made the classical music documentary Ensemble.
Meanwhile at #9 in the chart was Before Midnight, the latest film by Richard LINKLATER in a series that began with Before Sunrise (1995) and was continued in 2004 with Before Sunset. Given a medium-sized release, the film took 99,060 admissions in a single week.
Although it didn’t manage to break into the top 10, the independent film Dear Dolphin by first-time director KANG Jin-a took 5,185 admissions in its first two weeks. Centering on the accidental death of a young woman, and the efforts of her lover and her best friend to deal with the loss, the film has won praise for the acting performances of its leads RIE Young-zin (Antique, Memento Mori), LEE Hui-joon (The Unjust), and HAN Ye-ri (As One, South Bound). It premiered in competition at the 2013 Jeonju International Film Festival and won the CGV MovieCOLLAGE prize, which provides 20 million Korean won in print and advertising support, at least two weeks of screening time in CGV MovieCOLLAGE theaters, and 10 million Korean won to support the director’s next project.