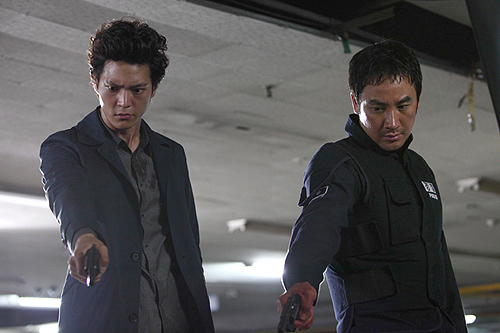 The comic book adaptation <Punch> has once again topped South Korea's biweekly box office chart. The film, which has shown exceptional box office resilience since its release on Oct. 20, sold another 1.15 million tickets to bring its overall total up to 4.8 million admissions (US$30.7 million). After the success of <Silenced>, this makes for two unexpected mid-budget commercial successes for top distributor CJ E&M after a summer of high-profile disappointments. The film stars YOO Ah-in and KIM Yun-seok in a story about a high school boy and his teacher who lives next door.
Meanwhile, the Korean police thriller <SIU: Special Investigations Unit> scored a healthy opening with approximately 550,000 admissions in its first six days on release. The story of a massive investigation into the death of policeman, the film starring EOM Tae-woong, JU Won and JEONG Jin-young is the second feature by director HWANG Byeong-gug (<My Wedding Campaign>). Although it trails <Punch> in the biweekly chart, on the weekend of its release it topped the box office.
Other films to perform well included the Hollywood films <Moneyball>, <Immortals> and the holdover <Real Steel>, which has grossed an impressive 3.3 million admissions. <Arthur Christmas>, targeted at Korea's growing market for family viewers, took 208,000 admissions in five days. Besides <SIU>, no other Korean release in the past two weeks managed to enter the biweekly chart.
The next few weeks will see the release of a string of Hollywood blockbusters, including <Breaking Dawn: Part One> on Nov. 30 (the film earned enough in two days of preview screenings to enter the biweekly chart at #9), Steven Spielberg's <Tintin> on Dec. 7, <Mission: Impossible - Ghost Protocol> on Dec. 15, and <Sherlock Holmes: A Game of Shadows> on Dec. 22.
Nonetheless, local cinema will be countering with perhaps the most anticipated film of the year, KANG Je-gyu’s $30 million World War II blockbuster <My Way>. If this film, scheduled for a Dec. 22 release, does anywhere near as well as KANG’s previous films <Taegukgi> or <Shiri>, Hollywood will have a hard time keeping up.
Any copying, republication or redistribution of KOFIC's content is prohibited without prior consent of KOFIC.
Related People Related Films