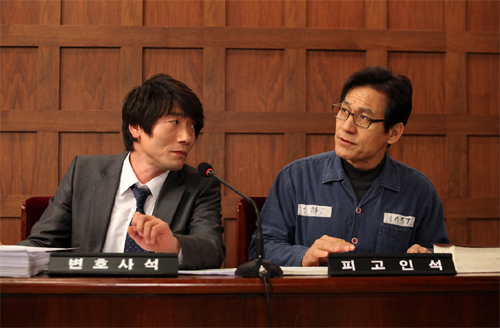 Two Korean films emerged as major hits in 2012's Lunar New Year holiday season - <Dancing Queen> and <Unbowed>. The success of <Dancing Queen>, which sold 2.26 million tickets in its first two weeks on release, was not entirely unexpected.
The comic drama by director LEE Seok-hoon (<See You after School>) stars HWANG Jung-min and UHM Jung-hwa in an unusual story about a struggling human rights lawyer who is picked by a major political party to run in the elections for Seoul Mayor. Meanwhile his wife, who has dreamed all her life of becoming a singer, is suddenly given the opportunity - but given conservative attitudes about the role of politicians’ wives, will her dream derail her husband's political career? Both critics and mainstream audiences have greeted the film warmly, with the acting performances of the two leads singled out for particular praise.
If the strong start of <Dancing Queen> was no surprise, the performance of its strongest competitor certainly was. <Unbowed> is a film based on a real-life court case in which a professor carrying a crossbow confronted a judge whom he felt had issued a biased judgment against him. The film focuses on the efforts of a lawyer to defend his client, who appears to be the victim of further biased judgments by the court.
Directed by CHUNG Ji-young, a major figure of 1990s Korean cinema who hadn't directed a film in over a decade, <Unbowed> was well received during its premiere at the 2011 Busan International Film Festival. However the low-budget work was not expected to make much of an impact at the box office. Nonetheless, the dramatic story and the timeliness of its themes have turned the film's release into a social phenomenon, similar to how the Korean film <Silenced> became a #1 box office hit last September.
<Unbowed> sold 2.05 million tickets in its first two weeks, and has only gained momentum as time has passed. At the time of this writing it has overtaken <Dancing Queen> to become the #1 film in the daily box office tallies.
These two main box office contenders are trailed in the rankings by three US films - <Puss in Boots>, <Journey 2: The Mysterious Island> and <Mission: Impossible - Ghost Protocol>.
Jan. 2, 2012
Any copying, republication or redistribution of KOFIC's content is prohibited without prior consent of KOFIC.
Related People Related Films