THE GANGSTER, THE COP, THE DEVIL Get Ready to Brawl at NIFFF 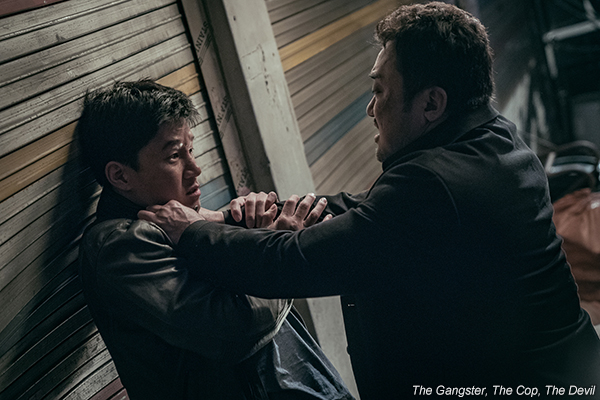 On the heels of a well-received premiere in the midnight lineup of the Cannes Film Festival and a healthy theatrical run at home, LEE Won-tae’s sophomore film The Gangster, The Cop, The Devil is heading to the 19th edition of the Neuchatel International Fantastic Film Festival (NIFFF) next month. The festival will also screen the animated shorts GALAPAGOS by HUR Bum-wook and KIM Min-seok’s Centipede Noise.
The Gangster, The Cop, The Devil stars Don LEE (aka MA Dong-seok) as a tough gang boss who survives an attack by the vicious serial killer known only as K (KIM Sung-kyu) who has been terrorizing his town. Tae-sook (GIM Mu-yeol) is a detective who despises the criminal element but when the trail to K turns cold, he turns to the only living witness he knows and before long this detective and criminal underworld archenemy join forces to track K down.
Two years after his Colonial era prison drama MAN OF WILL (2017), director KIM premiered his latest film in the midnight section of the Cannes Film Festival in May. That same month, the film debuted in theatres in Korea, and amassed a strong 3.36 million viewers (USD 25.12 million). Reports suggest that LEE will star in a US adaptation of the film, which will be produced by Sylvester STALLONE’s production company Balboa Productions.
Described in the NIFFF program as a social nightmare, GALAPAGOS is the latest film from director HUR Bum-wook, who previously made the feature On The White Planet (2015), a graduation project of the Korean Academy of Film Arts (KAFA). KIM Min-seok’s Centipede Noise is described as a do-it-yourself sci-fi.
This year’s NIFFF will take place from July 5 to 13.
Any copying, republication or redistribution of KOFIC's content is prohibited without prior consent of KOFIC.
Related People Related Films Related Company Related News