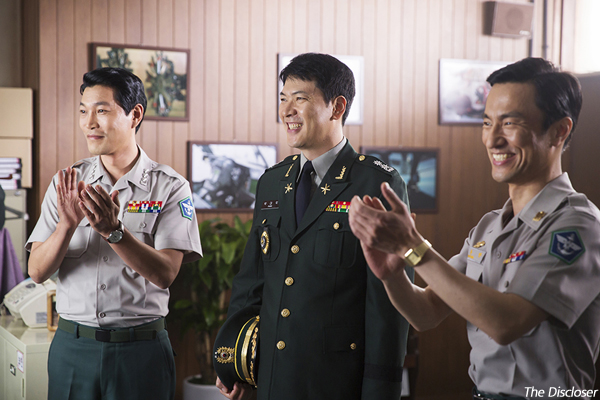 Military court thriller The Discloser, the final work of filmmaker HONG Ki-seon who passed away shortly after completing production, will be released theatrically in January next year. The film, which stars KIM Sang-kyung and KIM Ok-vin, initially premiered during a retrospective of Director HONG’s work screened at the Bucheon International Fantastic Film Festival (BiFan) in July.
KIM Sang-kyung stars as an investigator in the army who looks into a military cover-up when an air force pilot winds up in a coma following an unexpected test flight crash.
Known for thrillers such as Memories of Murder (2003), KIM Sang-kyung was last seen in The Deal (2015). Thirst(2009) star KIM Ok-vin recently made an impression as the lead in the action film The Villainess, which debuted in a midnight slot at the Cannes Film Festival this year.
Born in 1957, Director HONG was involved in several projects in the 1980s before making his debut as a feature filmmaker in 1992 with Cutting the Sorrow With a Knife Stuck in the Chest. He went on to make The Road Taken (2003) and took part in the humanitarian omnibus If You Were Me 3 (2006).
Prior to The Discloser, HONG’s most recent work had been Where the Truth Lies in 2009, a film that chronicled an infamous murder committed by an American soldier at a fast food restaurant in the Itaewon neighborhood in 1997. HONG passed away in December last year, six days after principal photography wrapped on The Discloser.
Any copying, republication or redistribution of KOFIC's content is prohibited without prior consent of KOFIC.
Related People Related Films Related Company