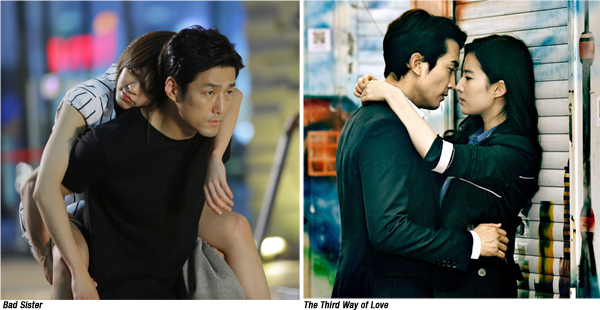 Bad Sister, opening on May 26th, is Volcano High (2001) director KIM Tae-kyun’s first Chinese film. The film is a romantic comedy in which a woman (Ivy CHEN) visits Korea to stop her brother to marry a Korean woman and comes across her in-law (JI Jin-hee). JI has taken the leading roles in various genres of Chinese movies like melodrama On The Road (2013) and action movie Helios (2013) since his first Chinese movie Perhaps Love (2006).

The Third Way of Love will be releasing on May 19th. The film is a melodrama directed by John H. LEE, who finished the Korean War blockbuster Operation Chromite featuring Liam Neeson, and co-stars actual lovers SONG Seung-heon and LIU Yifei. It is a story about a successor of conglomerate (SONG Seung-heon) getting to know love through a woman (LIU Yifei) after they meet by chance on the plane. The film is based on the Chinese bestselling novel.