Strong Pre-Sales for OPERATION CHROMITE with Liam Neeson at EFM 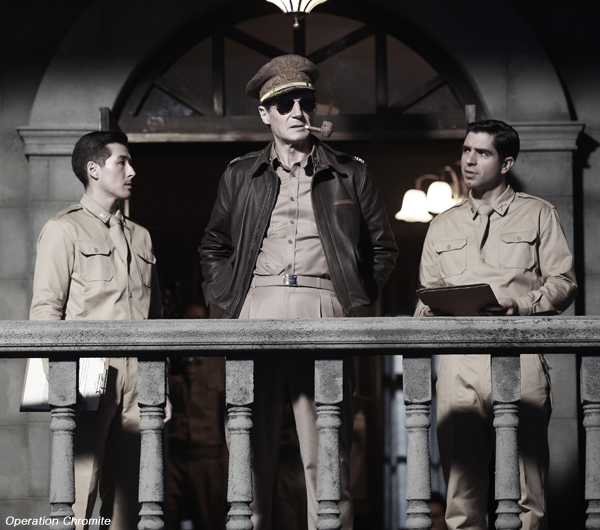 Korean sales company FINECUT is generating plenty of buzz at the European Film Market (EFM) in Berlin for their hot new title Operation Chromite. FINECUT gave buyers a taste of the Korean War film, which only started filming in December, showing clips at their EFM booth including scenes with Liam Neeson, playing General MacArthur.
The film, director John H. LEE’s follow-up to 71-Into The Fire (2010), features Korean star LEE Jung-jae (Assassination, 2015) and LEE Beom-su (The Beauty Inside, 2015), and is being produced by TAEWON ENTERTAINMENT’s CHUNG Tae-won. During EFM, the film, which will wrap in March and hit Korean screens in July, was acquired by Splendid for Germany, Austria and the Benelux, Discovery Film & Video for ex-Yugoslavia and Moviecloud for Taiwan. Operation Chromite is being financed and locally distributed by CJ Entertainment, which also holds the rights for China, Indonesia, Mongolia, The Philippines, Thailand and Vietnam.
Also on FINECUT’s slate at the market is YOON Ga-eun’s feature debut The World of Us, which is competing in Berlinale’s Generations section. The children’s tale is courting interest from festival programmers and has been embraced by audiences in Berlin, particularly children who connected with the film’s theme.
Another title which has been drawing attention for some time is YEON Sang-ho’s new animated title Seoul Station. Its domestic release is expected to follow the summer bow of YEON’s upcoming live action debut Train to Busan, which is repped by Contents Panda.
FINECUT’s other EFM titles include NA Hong-jin’s highly anticipated Goksung (working title) and MISBEHAVIOR from Set Me Free (2014) director KIM Tae-yong, both of which are in post-production, the completed titles LOVE GUIDE FOR DUMPEES and Blossom and the in-production animated feature Red Shoes and the Seven Dwarfs.
Any copying, republication or redistribution of KOFIC's content is prohibited without prior consent of KOFIC.
Related People Related Films Related Company Related News