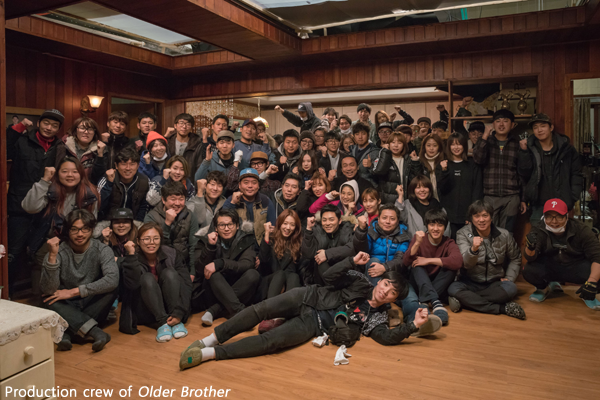 Filming on upcoming drama Older Brother (literal title) wrapped on New Year’s Eve after a three-month shoot. From director KWON Soo-kyung, the drama features JO Jung-suk as a man who is released from jail thanks to his younger brother, a promising athlete played by DOH Kyung-soo (a.k.a D.O.), a member of the K-pop band EXO. After 15 years apart, the brothers try to live together until an accident threatens the younger brother’s career prospects. PARK Shin-hye appears as a judo coach.
Older Brother will mark KWON’s first directional outing since he debuted with Barefoot Ki-Bong in 2006. However, in the interim, he was attached to a number of projects which ultimately didn’t come to pass, such as the drama Little Hero, which would have featured actor JUNG Joon-ho, and the Japan-Korea co-produced romantic comedy Fly Me to the Moon. He was also an assistant director on Bichunmoo (2000).
Following appearances in hit period dramas The Face Reader (2013) and The Fatal Encounter (2014), the in-demand JO has graduated to leading roles, most recently in The Exclusive : Beat the Devil's Tattoo (2015). The enormously popular PARK has appeared in Miracle in Cell No.7 (2013) and The Royal Tailor (2014), in addition to numerous major TV credits. Singer DOH is also slated to appear in Unforgettable next month and joined the voice cast of animation The Underdog this week.
The drama comes from a script by YOO Young-a, previously responsible for titles such as Wedding Dress (2010), As One (2012) and My Paparotti (2013). The CJ Entertainment title is scheduled for release in the second half of 2016.
Any copying, republication or redistribution of KOFIC's content is prohibited without prior consent of KOFIC.
Related People Related Films Related Company Related News