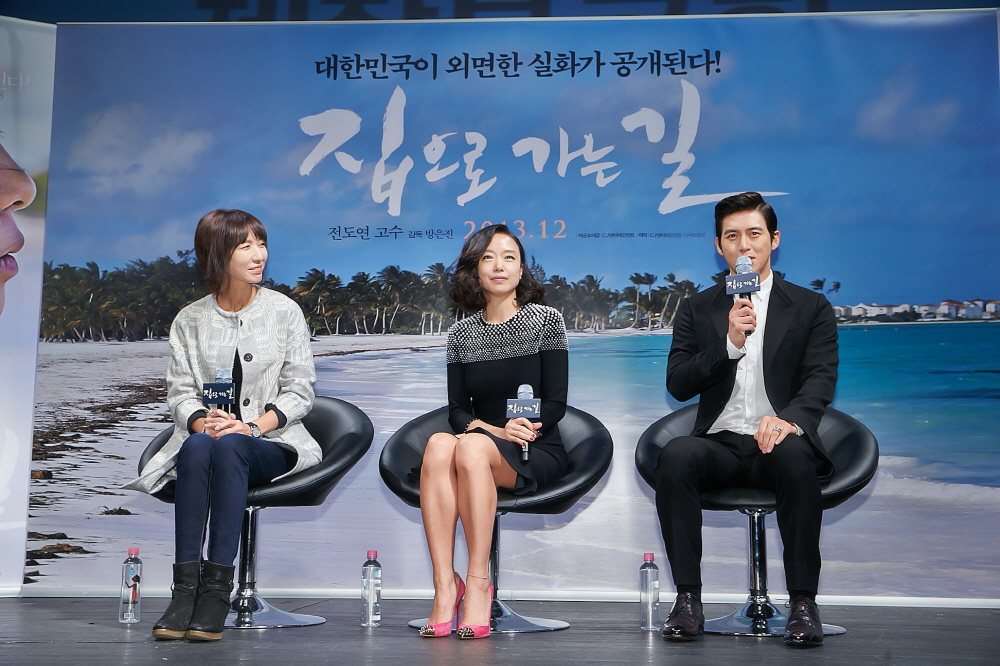 A production update press conference was held on November 12th in the Apgujeong CGV theater for Way Back Home (a CJ Entertainment and Dasepo Club Co. Ltd production) which has been getting a lot of attention as a collaboration between JEON Do-yeon, known as the  ‘Queen of Cannes’ for her 2007 Best Actress triumph at the festival for Secret Sunshine, and filmmaker PANG Eun-jin of Princess Aurora (2005) and last year’s Perfect Number.
Way Back Home tells the true story of JANG Mi-jeong, an ordinary housewife-turned-convict who was arrested for allegedly trafficking narcotics at France’s Orly Airport on October 30th, 2004 and imprisoned on the Island of Martinique in the Atlantic. Returning for the first time in two years since Countdown (2011), JEON partners with Love 911 and The Front Line’s KO Soo starring as her husband ‘Jong-bae’ who makes a desperate plea to the world in order to save his wife.
JEON stated at the press conference that “It was heart wrenching to know Way Back Home was based on a true story, but I decided to accept the part because I believe it could happen to anyone”. KO explained that JEON was the reason why he agreed to work on the film “By playing Jong-bae, I was able to tackle the challenge of internal and external change.”
Director PANG exclaimed “Jeong-yeon’s role was for JEON Do-yeon from the start” also expressing her trust and confidence in both actors “JEON Do-yeon and KO Soo will show you an incredible chemistry you’ve never seen before.” Invested and distributed by CJ Entertainment, Way Back Home will be released on December 19th.
Any copying, republication or redistribution of KOFIC's content is prohibited without prior consent of KOFIC.
Related People Related Films Related Company