Jun 11, 2013
17 Features and Shorts in NYAFF Lineup
Summer is here and Korean film looks to be top of the menu for Asian cinema fans in the America’s top metropolis. The popular New York Asian Film Festival is preparing to put on quite a show this year by screening 63 films hailing from across the Asian continent but front and center will be Korea, as 15 features and two shorts from the peninsula have found their way into NYAFF’s 2013 program. 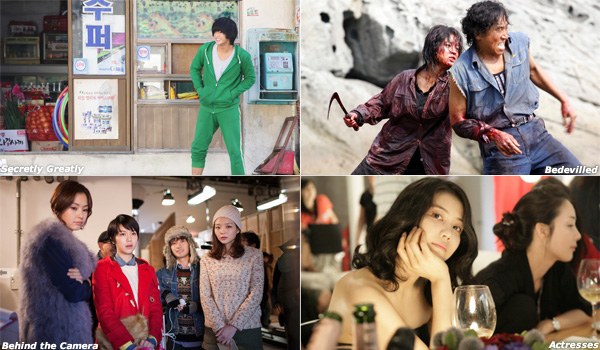 Leading the many Korean films on offer will be a special Centerpiece Presentation of JANG Cheol-soo ’s sophomore film Secretly Greatly. The film, based on the hit webcomic ‘Covertness’, recently opened to great fanfare in Korea. It has amassed a slew of box office records in the days following its opening, marking a big return for the director of Bedevilled (2010).
A number of Korean film professionals will be making the trip to New York this year. RYOO Seung-bum will have his own retrospective while young starlet KIM Ko-eun will be honored with the Star Asia Rising Star Award. In addition, revered cineaste E J-yong will be there for a presentation of his second entertainment industry mockumentary Behind the Camera, following Actresses (2009), which features the director playing himself as he endeavors to remotely direct the world’ first feature via Skype. Also in attendance will be LEE Won-suk, who will be on hand during a screening of his debut How to Use Guys with Secret Tips, an innovative, colorful and warmly received new romantic comedy.

Among films highlighted in the official NYAFF press release announcing the festival’s program was KIM Dai-seung’s erotically-charged period thriller The Concubine. Other films that will screen in the Big Apple include: the romantic film Very Ordinary Couple, which follows the breakdown of a couple’s relationship, performed by KIM Min-hee and LEE Min-ki: the Siamese twin fantasy drama The PeachTree will also be featured this year; the multiple festival award-winner Juvenile Offender from director KANG Yi-kwan; and the North Korea/Belgium/UK co-production Comrade Kim Goes Flying, which has been a sensation on the festival circuit in late 2012/2013.
Finally, three highly regarded shorts will also be unspooling at this year’s NYAFF. Preceding Behind the Camera will be a screening of Jury, the debut short of KIM Dong-ho, the honorary director of the Busan International Film Festival. Going before How to Use Guys with Secret Tips will be One Perfect Day, genre specialist KIM Jee-woon’s first attempt at a romantic comedy. Finally, Juvenile Offender will be paired with a presentation of Day Trip, the second collaboration between brothers PARK Chan-wook and PARK Chan-kyong.
Any copying, republication or redistribution of KOFIC's content is prohibited without prior consent of KOFIC.
Related People Related Films Related Company