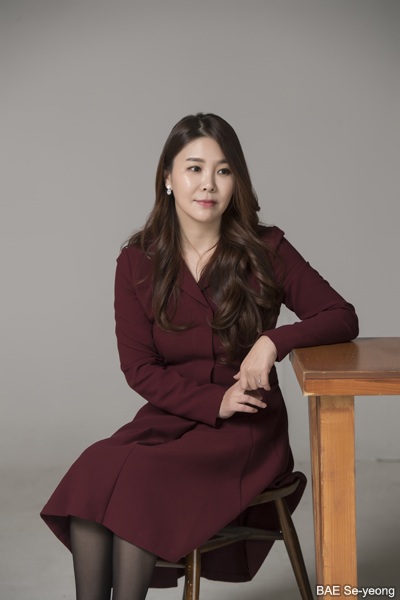 While Intimate Strangers was the biggest success of the second half of 2018, the biggest hit this year is incontestably Extreme Job with its more than 16 million admissions. Screenwriter BAE Se-yeong contributed to both of them as script editor, adding some flavor to these films that could be made or broken on their dialogues. Following her debut in 2007 with Swindler In My Mom’S House, she has been writing original scripts for 13 years, among which Lifting Kingkong (2009), We Are Brothers (2014) and What a Man Wants (2018). As her long experience is now paying off big time, we met with BAE Se-yeong to look back on her adaptation work.
You adapted the original script of Extreme Job with screenwriters MOON Chung-il, HEO Da-joong and director LEE Byoung-heon. What was the focus of this adaptation?
It all started with this fun idea of an anti-narcotics squad with a poor track record taking over a fried-chicken joint for an undercover operation, but the restaurant becomes a hit. This concept was already fully developed in MOON’s scenario. One focus while working on the script was to make the story credible so that this choice wouldn’t seem absurd. Another was the roles of the antidrug squad members. In the first draft, the story was centering on the squad chief (RYU Seung-ryong) and Yeong-ho (LEE Dong-hwi) and we had a strict delimitation between leading and supporting roles in such a way that even the final bust was made by these two characters only. But then I gave more importance in creating characters, as I was thinking, “What if I give each squad member capacities like in Avengers?” And I also sought to make the more important lines more flavorful.
Intimate Strangers is a remake of the Italian film Perfetti sconosciuti (aka Perfect Strangers, 2016). What did you pay the most attention to?
For Intimate Strangers too, the structure was already there. But it was difficult for the audience to identify with the characters, despite them being developed within an interesting structure. Their concerns didn’t sound like the things we would talk about. That’s because the emotions themselves are different. Adapting the script to Korean sensibilities, each one of these characters had to be someone I could see around me. The lines also had to sound funny in Korean. Since the setting is a confined space, there was nothing I could spruce up but the dialogs. So I focused on bringing nuance and rhythm to the lines. Also, the female characters in the Italian film didn’t have much to do. So, for the Korean remake, we developed them so that they too would have secrets and dissensions between them. 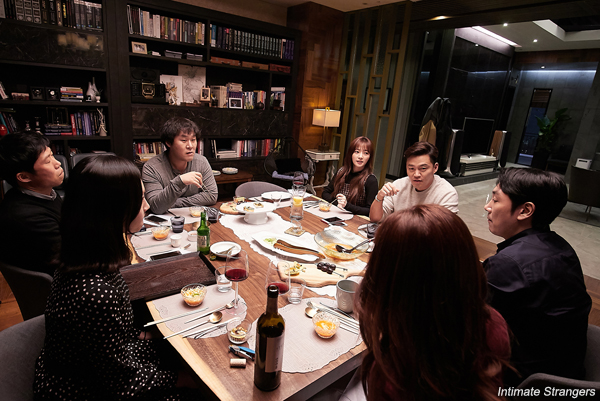 You also contributed as a screenwriter to the TV series Big Forest on tvN and the show Saturday Night Live Korea. Since you worked on everything from TV to films, with a preference for the latter, what do you think is the appeal of each format?
They have very different appeals. The appeal of variety programs is that it is “speedy”. The reaction is very fast. I also have to always keep in mind the current trends and bring them up. Whereas I would say that entertainment programs consist in moving forward while sharing feedback, movies on the contrary don’t allow for too much trendiness. That’s because you never know when it will eventually be released. I may use today some Internet slang in one of my scripts, and when the film will get released in 3 years it will sound childish. Movies are clearly different from entertainment programs in that you have to write more universal stories. In that regard, handling each script according to the media, that’s the difficult part. When you debut in entertainment, they tell you that you never get used to seeing people who are right next to you one day disappear the next day. I haven’t penned any real TV series yet. For Big Forest on tvN, I participated as script editor. The advantage with TV series is that the lines I end up writing don’t get changed. I feel good hearing the exact lines I wrote. This way, it makes me more receptive to the reviews people make. In some cases, like for movies, many things get changed. At such times, I would say it’s unfair to be criticized. However, if you consider who will take responsibility for it, it’s only natural. There are many cases where the screenwriters can still find work after a failure, while it gets more complicate for the director.
When you write a scenario, what do you take as your reference point? Is it the reactions of the general audience, or the people in your entourage? Or maybe your own appreciation?
The three of them. At first, I trust my instinct. Because, as long as I find it interesting, I can make it to the end. And then I receive a lot of feedback. The first thing I do once I finish a script is to meet people. I revise it again based on their reactions. There are parts they say are “fun”, and others that are just “okay”, so I take out the latter. To the students who are learning to become screenwriters, this is an essential part. Students don’t envisage to show their work to anyone, but if they cannot withstand massive criticism, their writing will never improve. I too was terrified at first. I would ignore feedbacks or even fight back. But with time, after spending 15 years dealing with many comments, I came to value these feedbacks. Of course, this is not about changing everything according to feedbacks, but I refer to them a lot. 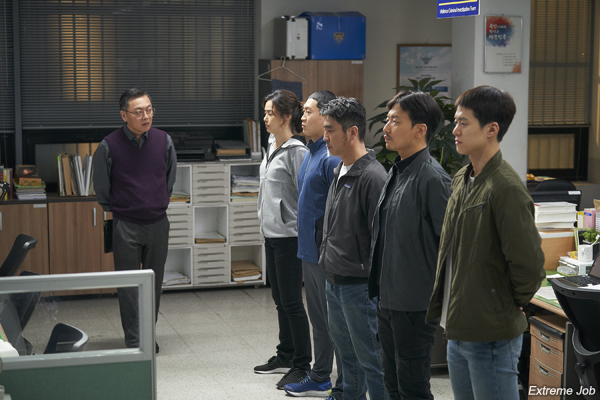 The two films you announced as your next projects, My Uncle, Bruce Lee and Stella, are comedies.
I always write my script thinking of them as human dramas. Stella is a human drama, not a comedy like Extreme Job. My Uncle, Bruce Lee is the film adaptation of CHEON Myeong-kwan’s novel. As it will retrace the life of a person just like in the original novel, it may well include some comic episodes, but I don’t think we could call it a simple comedy. I’ve met the directors of both movies and the projects are currently moving forward. On top of that, there is a melodrama film named Cardiff. It’s the first time I wrote a melodrama, so it’s a film that makes me nervous but that I’m also looking forward to. A few days ago, I finished Big Deal. It’s a story based on a novel called “The Ferris Wheel of Nightmares”, and considering that it will be a farce, then yes, it is a comedy. There is quite a lot of films I’ve worked on that are about to get released. The thing that unites them all is that they are human dramas, stories about people. This is the gist of my stories.
When did you write those screenplays?
Between 2015 and 2017. I had my second child in 2014. It was difficult to live it day by day, but I was incredibly prolific. I think I did nothing but write while my mother was raising my child. Among the screenplays I wrote then, two were successfully turned into movies. The two films I wrote in a precarious situation and in a rush were better reviewed than those I carefully wrote for years, to a point where I thought to myself, “Don’t bother writing original stories, editing someone’s strong story suits you better”.
What can fuel your productivity?
I wrote many films of my own, but there is no film that worked particularly well. And then when Intimate Strangers opened, I was introduced as the screenwriter of SNL. It made me sad to think that despite 13 years writing scenarios, and with 10 films released, I was still being presented as a screenwriter of SNL. The films I thought would work well didn’t do so, and yet I worked hard on them, telling myself, “You will see, just you wait”. Now that one of my films finally did well, I’m still ambitious and tell myself, “That’s right, you can write well like this. I will write a good screenplay that is neither a remake nor an adaptation and get credit for it”.
Any copying, republication or redistribution of KOFIC's content is prohibited without prior consent of KOFIC.
Related People Related Films Related News 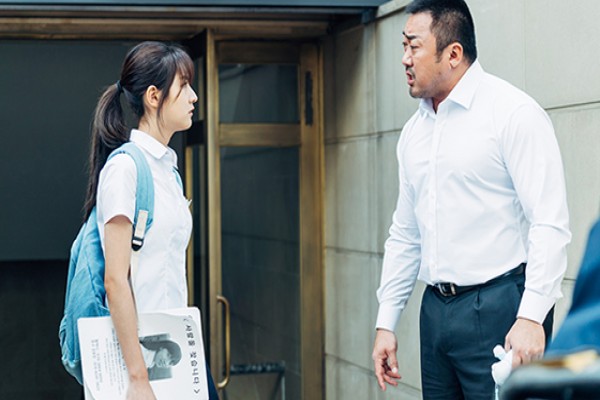 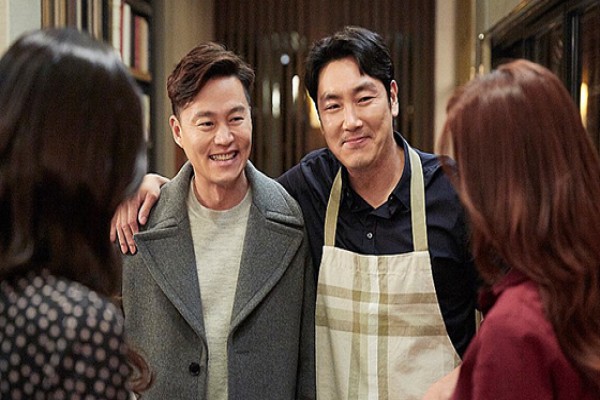 [Boxoffice Reports] INTIMATE STRANGERS Opens Its Secrets to the Masses