The Secrets Beyond the Door - Korea’s Apartment-Set Horrors 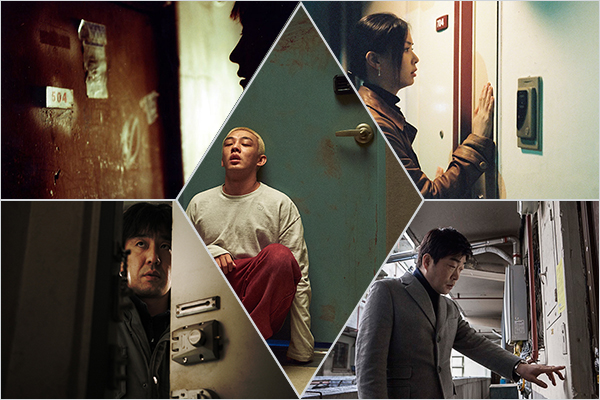 Late last month, after months of depressed grosses, Korean cinemas came roaring back to life with the release of the local zombie horror-drama #ALIVE. The film benefitted from its attractive young cast (YOO Ah-in and PARK Shin-hye) as well as its positioning as the first truly major film to go on release since the outset of the Covid-19 pandemic, but what really turned the film into a must-see event was the eerie sense of familiarity for viewers who had spent much of the past few months stuck at home. The film deals with two youths confined to apartment units in adjoining towers from the same complex, as a zombie pandemic rages outside.
The modern apartment was introduced to Korea in the mid-1960s and these days 60% of all Korean residents live in one, making it the overwhelmingly dominant residential space in the country. This has not gone unnoticed by filmmakers, and as apartment towers steadily began to crowd the country’s skyline, so too did their presence grow more pronounced in the country’s films.
As both symbols of social mobility and private spaces easily invaded by nearby neighbors, Korean apartments have been particularly noticeable in Korea’s crop of horror films. In stories of secret squatters, dueling faiths, personal traumas and keeping the undead on the right side of a locked door, apartments have proved to be especially effective tools to deliver scraps and social commentary during two decades of Korean chillers.
Gooseflesh 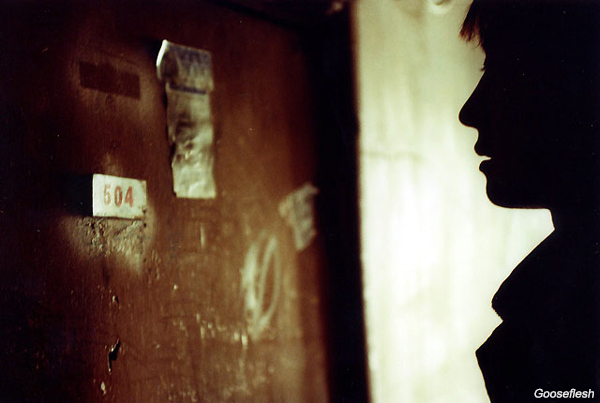 Director YOON Jong-chan
Cast KIM Myung-min, JANG Jin-young
Release Date August 3, 2001
Apartment units are generally employed as symbols of social mobility in Korean media, but in the atypical K-horror Gooseflesh, the decaying Migum Apartment building becomes a distressing meeting place for people who have been forced to the very fringes on Korean society. Though they live in a large and interconnected modern metropolis, taxi driver Yong-hyun (KIM Myung-min), convenience store clerk and domestic abuse victim Sun-young (the late JANG Jin-young) and an assortment of their neighbors all seem utterly disconnected from the world that surrounds them. There are secrets to be found behind every door, but since residents are privy to private moments happening beyond their thin walls, in a sense the main secret seems to be the building itself, standing forlorn in the city and serving as a final weigh station for poor souls on their inexorable paths to death or irrelevance.
A.P.T. 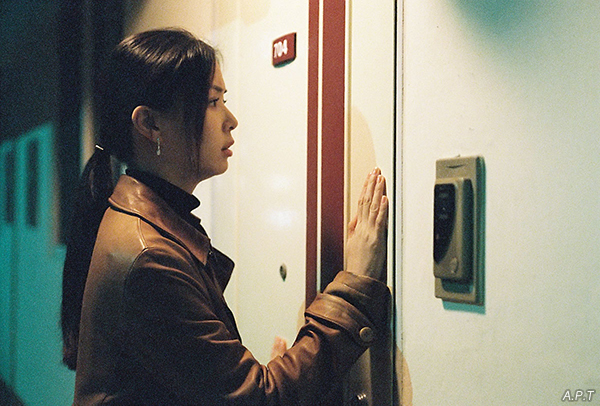 Director AN Byung-ki
Cast KO So-young, KANG Sung-jin, JANG Hee-jin
Release Date July 6, 2006
This idea of shared hidden secrets is once again prevalent in A.P.T, the fourth feature by horror specialist AN Byung-ki (The Phone, 2002; Bunshinsaba, Ouija Board, 2004). Based on a webcomic by the popular author KANG Full, and with a nod to the HITCHCOCK classic Rear Window, the film focuses on Se-jin (KO So-young), a career woman who idles the time by watching her neighbors through a pair of binoculars. One day, at exactly 9:56pm, the lights flicker in the building next door and a body is found, the result of an apparent suicide. Every night, at the same time, Se-jin witnesses the same strange phenomenon as the bodies begin to pile up, which all seem connected to the wheelchair bound Yoo-yeon (JANG Hee-jin) whom she has befriended. Se-jin attempts to get to the bottom of the deaths and she gradually uncovers a pattern of hidden traumas and cyclical abuse occurring behind closed doors.
Possessed 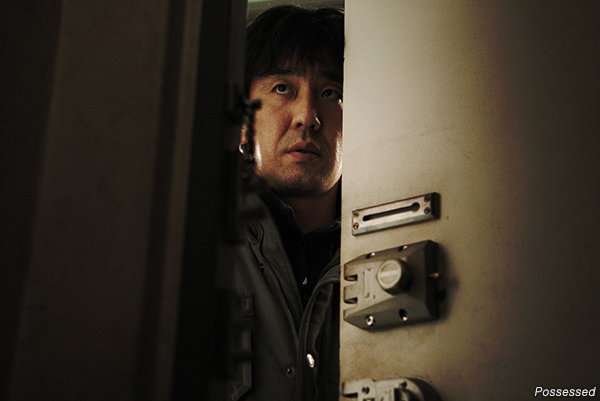 Director LEE Yong-ju
Cast NAM Sang-mi, RYU Seung-ryong, KIM Bo-yeon, SHIM Eun-kyoung
Release Date August 12, 2009
In LEE Yong-ju’s acclaimed but little-seen debut Possessed, college student Hee-jin (NAM Sang-mi) returns home to her pious Christian mother when her younger sister goes missing. She reports her missing but the detective (RYU Seung-ryong) in charge of the case seems ill-inclined to provide much assistance, at least until the first of a series of mysterious suicides takes place at the building. Before long Hee-jin comes to learn that her sister’s disappearance may be connected with a shaman who also resides in the building and provides talismans for several other residents. Meanwhile, her mother won’t let her enter a sealed off room in their apartment. Director LEE, who studied architecture in school, adds a vivid spatial geography to a tense and surprising story about the clash of faiths and the lengths people will go to escape their own situations.
Hide and seek 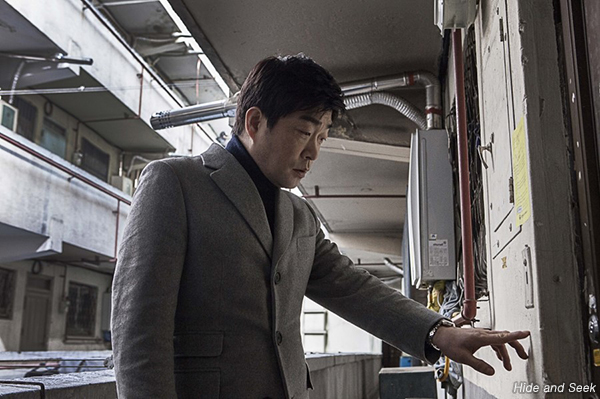 Director HUH Jung
Cast SON Hyun-ju, MOON Jung-hee, JEON Mi-sun
Release Date August 14, 2013
The sleeper summer hit of 2013, director HUH Jung’s debut film focuses on two very different apartment complexes. Sung-soo, a successful family man (SON Hyun-ju) suffering from an obsessive compulsive disorder, lives in a sleek new apartment building in the city but ventures out to a rundown courtyard apartment complex outside of town when he hears that his brother has gone missing. There he finds paranoid residents, strange symbols on the doors of different apartments and scant clues as to his sibling’s whereabouts. When his family returns home, the symbols soon begin to appear in their own building and strange things start to take place there. HUH’s film cleverly combines genre codes and urban fears in a compelling parable about social envy that takes several wicked turns. Here, even the ideal family home can’t save people from their own dark secrets, as well as some most unwelcome houseguests.
#ALIVE
d 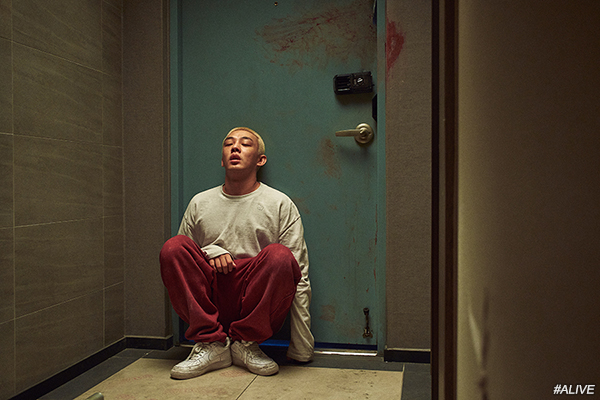 Director CHO Il-hyeong
Cast YOO Ah-in, PARK Shin-hye
Release Date June 24, 2020
This brings us all the way to the present and the latest iteration of the zombie genre, which has gripped the nation ever since the debut of TRAIN TO BUSAN (2016) four summers ago. #ALIVE focuses on a young man (YOO Ah-in) who is confined to his apartment when a zombie outbreak grips his city. In a tale with eerie similarities to the self-isolated lifestyles many were forced to become accustomed to this year during the global health crisis, the young man eventually ventures outside, when he discovers that a young woman (PARK Shin-hye) is facing a similar predicament to his own in an adjacent building.
Any copying, republication or redistribution of KOFIC's content is prohibited without prior consent of KOFIC.
Related People Related Films