I CAN SPEAK Resonates in 1st Place 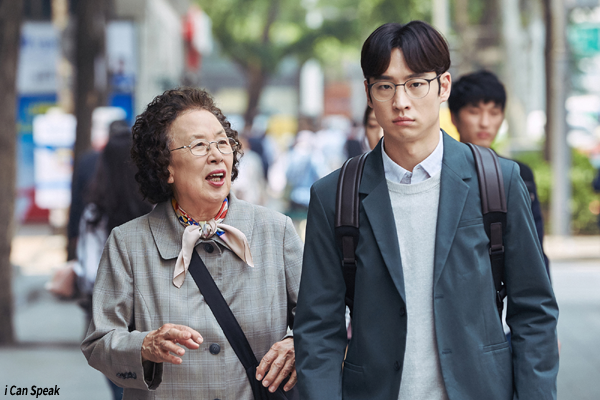 Korean films took the top two spots as they accounted for two thirds of sales during a slow weekend that recorded just 1.3 million admissions. Exhibitors have nothing to fear however, as the stage is merely being set for this year’s extra-long Chuseok holiday, when business should come roaring back with a vengeance.
Scoring a first place debut this past weekend was the local comedy-drama I Can Speak, starring NA Moon-hee as a cranky elderly woman who harangues LEE Je-hoon’s civil servant. The film filled 608,000 seats (USD 4.39 million) in its first weekend and has welcomed 727,000 visitors (USD 5.18 million) in its first four days. Reviews and users scores have been ecstatic, which may indicate that this latest film from Cyrano Agency (2010) director KIM Hyun-seok is settling in for a long run in theaters.
Sliding 56% down to second in its third weekend was WON Shin-yun’s MEMOIR OF A MURDERER which banked another 215,000 admissions (USD 1.59 million). The Showbox title has been a popular draw in September, with 2.47 million viewers (USD 17.64 million) and counting.
Edgar Wright’s Baby Driver slowed 54% during its second spin on the charts, adding 154,000 spectators (USD 1.16 million) to bring its total to 718,000 entries (USD 5.21 million). The Hitman’s Bodyguard brought in another 55,000 (USD 428,000) in fourth place for a new 1.6 million total (USD 11.69 million), while American Made rounded out the top five as it crashed 80% with 41,000 viewers (USD 301,000) and 386,000 admissions (USD 2.71 million) overall.
Topping the diversity chart was the Spanish thriller The Invisible Guest with 36,000 entries (USD 268,000) and 44,000 spectators (USD 328,000) overall. Korean production company Realies Pictures (Masquerade, Along with the Gods) recently announced that they had optioned the film for a Korean remake.
Theaters will welcome a lot more foot traffic this week as word of mouth for i Can Speak grows, but especially for the hotly anticipated debut of Kingsman: The Golden Circle. The first Kingsman was an enormous hit in Korea, welcoming 6.13 million viewers in 2014.
Any copying, republication or redistribution of KOFIC's content is prohibited without prior consent of KOFIC.
Related People Related Films Related Company Related News