THE PHONE Rings Up First Place

Oct 27, 2015
Korean Thriller Brings THE MARTIAN Down to Earth 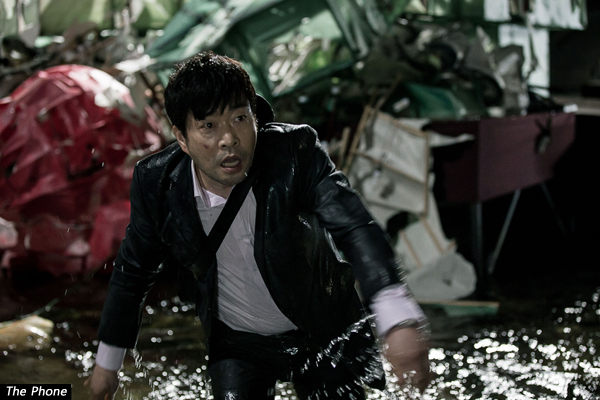 A new Korean thriller has ascended to the top of the charts as local films found their footing in the wake of a short period of Hollywood dominance. In all, some 1.9 million viewers visited theaters, 57% of which for domestic fare, during the late October weekend.
Following Hide and Seek (2013) and The Chronicles of Evil, SON Hyun-ju shows off his box office mettle once again in new thriller The Phone, from distributor Next Entertainment World (N.E.W.). Co-starring UHM Ji-won, the film rung in a solid 613,239 admissions (USD 4.32 million) over the weekend and 729,114 (USD 5.1 million) since its Thursday bow. Riding on SON’s everyman appeal, the film has drawn generally favorable responses from audiences. Though the film should continue to draw some crowds, all signs point to it not breaking out in a significant way.
Shedding 34% of its audience, The Martian came back down to earth in its third weekend, adding another 534,847 viewers (USD 4.02 million) for an impressive 3.95 million (USD 28.62 million) total. It likely won’t quite make it to five million spectators but its solid performance indicates that distributors will be keen to program space dramas for some time to come.
ROH Deok’s (Very Ordinary Couple, 2013) second feature, the media thriller The Exclusive : Beat the Devil's Tattoo, had a mediocre debut in third place with 312,321 admissions (USD 2.2 million), and 401,552 (USD 2.78 million) after four days, adding yet another underwhelming bow for Lotte shopping Lotte Entertainment Co.,Ltd, which has been in the midst of a difficult year. However, the film has benefitted from very strong user ratings and may see its fortunes rise in the weeks to come. But with a slow start and so much competition in the wings, it may not be enough to reverse its fate.
Still hanging around during its fifth weekend was Hollywood workplace comedy The Intern, which receded 33% for an additional 212,595 spectators (USD 1.53 million). The sleeper hit has now amassed a stellar 3.16 million viewers (USD 22.13 million). American comedies often struggle in the market but with the right word of mouth we’ve seen a few hits recently, including this and Melissa McCarthy’s Spy (2.32 million admissions).
Opening in a disappointing fifth place was CJ Entertainment’s Collective Invention, which debuted in Toronto International Film Festival and had been hoping to crack the youth market. The high concept title brought in just 61,725 viewers (USD 407,845) over the frame and 76,846 since (USD 510,811) Thursday.
Three wide releases are shuffling into theatres next week though none seems poised to break out. Currently holding the reservations edge is CGV ARTHOUSE’s thriller That Man Is the One (literal title), with American imports The Walk and The Man from U.N.C.L.E. trailing it.
Any copying, republication or redistribution of KOFIC's content is prohibited without prior consent of KOFIC.
Related People Related Films Related Company