Foreign movies continue to dominate over Korean movies. According to the integrated ticket sales network of the Korean Film Council (KOFIC) on April 17th, the Marvel Comics Studios' Captain America: The Winter Soldier topped the box office chart even with the arrival of new Korean movies such as Broken and Innocent Thing.
Captain America: The Winter Soldier added 470,782 tickets over the last weekend (from April 11th to 13th) as it continues to maintain the top rank at the box office. Even though the audience number decreased 38.2% last week, revenue remained strong with a market share of 33%, boosted by the filming in Korea of Avengers 2: Age of Ultron. By the end of April 16th, the film reached a total of 3,434,853 admissions. The other big Marvel film Amazing Spiderman 2 will open on April 23rd, but until then Captain America: The Winter Soldier is expected to remain strong at the box office.
Among Korean movies, Broken, with leading actors JUNG Jae-young and LEE Sung-min saved face for the local industry. The film, written by the well-known Japanese author HIGASHINO Keigo, who also wrote the original stories for White Night (2009) and Perfect Number (2012), was directed by LEE Jeong-ho of Bestseller (2010). During its first three-day weekend, Broken drew 383,329 viewers, which is 90,000 less than the figure for Captain America: The Winter Soldier. Its total was 580,966 admissions as of April 16th. 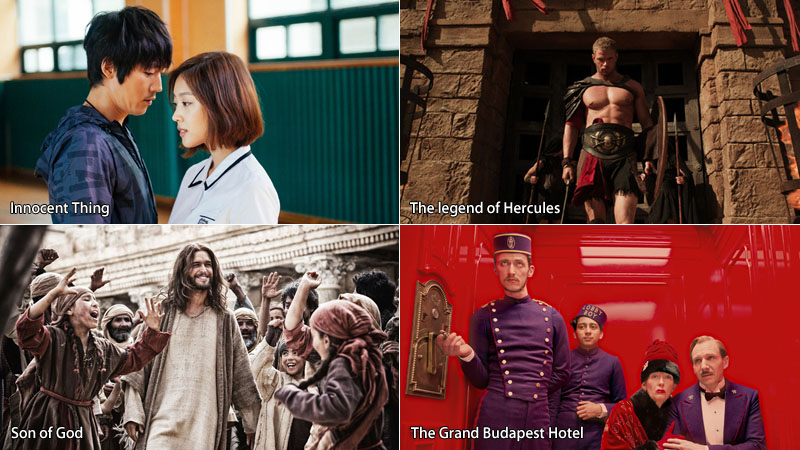 Innocent Thing, released on the same day as Broken, is not doing as well. The film, which reunited director KIM Tae-kyun and actor JANG Hyuk for the first time in thirteen years since Volcano High (2001), only drew 121,292 viewers. It had to compete against The Legend of Hercules and Son of God. It is called the Korean version of Fatal Attraction (1987) and is about a high school girl’s obsession for her PE teacher. Furthermore the new film Thread of Lies, by Punch (2011) director LEE Han, is now cooling off at the box office. It opened one month ago, and is about to close, having added 22,859 viewers last weekend, with was 77% down from two weeks ago. Thread of Lies recorded 1,612,487 admissions nationwide as of the 16th of this month.
Two historical movies, The Legend of Hercules and Son of God, started their runs at the box office, among new foreign films. The Legend of Hercules, which was directed by Renny Harlin of Die Hard 2 (1990) and Cliffhanger (1993) and stars Twilight actor Kellan Lutz, recorded 130,509 admissions nationwide during its opening weekend. Also, the Easter movie Son of God, which chronicles the life of Jesus Christ, succeeded to attract 104,664 viewers to theaters during the same period. But speculation is that both movies have not been received very well, so long runs seem unlikely. Meanwhile The Grand Budapest Hotel is still going strong. The film exceeded the 500,000 admissions mark last weekend, adding 67,393 viewers on 200 screens in the last week.
My Boy, by director JEON Kyu-hwan, who made The Weight (2012), topped the diversity film box office chart with 10.2% of ticket sales. Just behind were A Touch of Sin by Jia ZHANGKE and Manshin: Ten Thousand Sprits by PARK Chan-kyong. 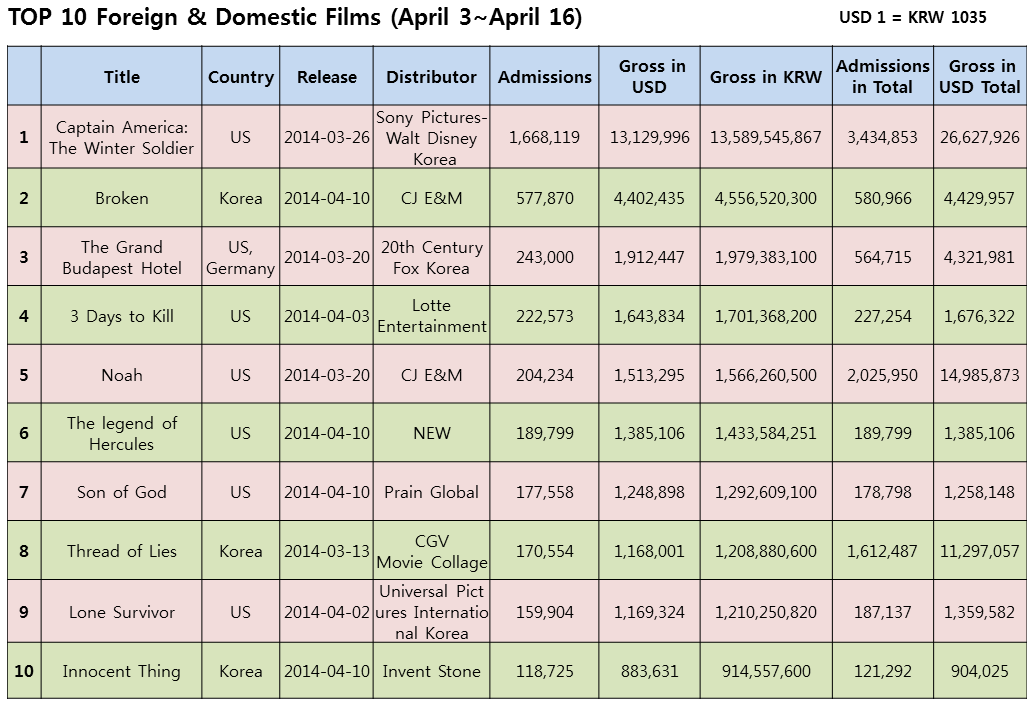