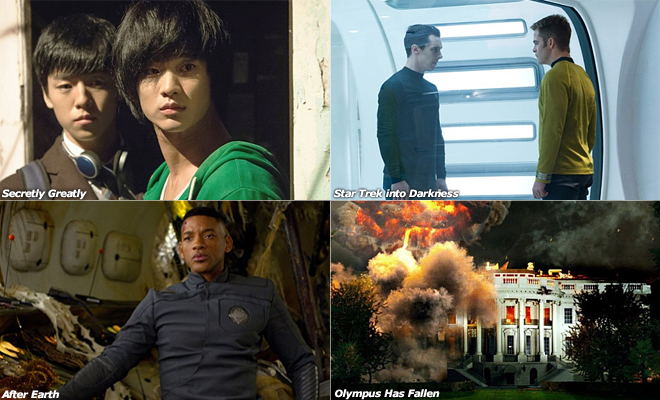 The new spy drama Secretly Greatly starring KIM Soo-hyun enjoyed a spectacular debut at the Korean box office, selling over four million tickets in its first eight days on release. It has broken numerous records for Korean films, including the best opening day ever (490,000 admissions on June 5) and the best single day performance ever (919,027 admissions on June 6, a national holiday). It also stands as the fastest Korean film to pass the 1 million and 2 million admissions milestones.
Secretly Greatly represents a noticeably commercial turn for director JANG Cheol-soo, who impressed critics and received an invitation to the Cannes Film Festival’s Critics Week section for his debut work Bedeviled (2010). This sophomore feature is based on a popular webtoon, and centers around an elite North Korean spy who is dispatched to the South and ordered to play the role of a village idiot in a small, rundown community. While he is there awaiting further instructions, two more spies are sent to the village, one posing as an amateur rock musician and the other as a high school student. However as a power shift occurs in the North, the trio are delivered an unexpected order.
The phenomenal early success of this work can be partially attributed to the name recognition of the original webtoon, but the immense popularity of young actor KIM Soo-hyun appears to be the primary driving force. After achieving stardom in TV dramas, KIM made his film debut as part of the ensemble cast of record-breaking hit The Thieves (2012). The success of Secretly Greatly now confirms his status as a major star capable of attracting huge ticket sales.
The film is expected to continue selling well, however it will have significant competition in its second week when superhero film Man of Steel opens. Advanced ticket reservations suggest that Secretly Greatly is likely to drop to #2 in its second week.
Meanwhile Star Trek into Darkness stands at #2 in this latest chart, having amassed a decent but not outstanding 1,259,925 admissions since its release on May 30. As Star Trek films and television shows have never made significant inroads into Korean culture, the film is being marketed primarily as a work of big-budget spectacle. Two other Hollywood films that opened in the past two weeks and turned in somewhat disappointing performances are After Earth with Will and Jaden Smith, which took 536,019 admissions in two weeks to land at #4; and the North Korea-themed Olympus Has Fallen, which took 147,859 admissions in a single week to take the #9 slot.

At #5, the Korean thriller Montage continued its respectable run with another 518,115 tickets. After four weeks on release the film has now amassed close to 2.1 million admissions. The work of first-time director JEONG Geun-seop, Montage centers around a series of events that take place exactly 15 years after the tragic kidnapping and murder of a young girl. With the statute of limitations about to run out, the girl’s mother (UHM Jeong-hwa) and the detective originally assigned to the case (KIM Sang-kyung) try desperately to determine the identity of the criminal and finally bring him to justice.
One other new Korean film, the omnibus Horror Stories II placed at #6 with 391,503 admissions in eight days. As in the previous installment Horror Stories from last summer, director MIN Kyu-dong directed a frame story to bookend several short films by other directors. These include KIM Hwi, who found commercial success last year with his debut thriller The Neighbors; KIM Sung-ho, best known for his debut film Into the Mirror (2003); and JUNG Beom-sik, the co-director of Epitaph (2007) who also contributed a critically praised segment to the original Horror Stories omnibus.