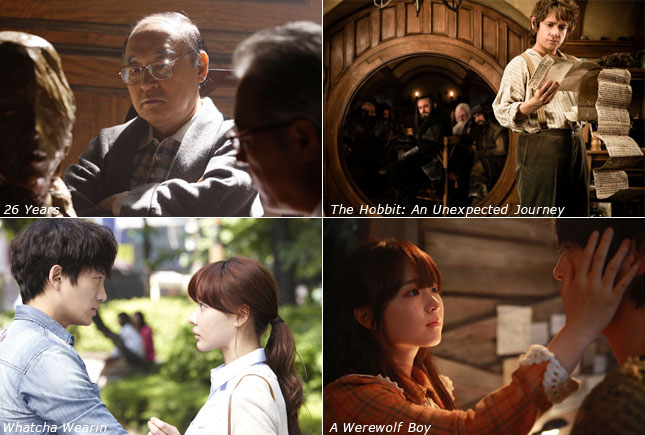 Controversial local hit 26 Years, which has demonstrated considerable staying power since its November 29 release, sits at the top of the Korean box office for the December 6-19 period. The film, based on a famous webcomic by KANG Full, details the efforts of five citizens to assassinate the man responsible for the Gwangju Massacre of May 1980. Although the film has drawn polarized responses from viewers, it has been particularly popular in the southwest region of Korea around Gwangju. In its second and third week the film grossed 1,633,986 admissions to bring its overall total to 2.7 million admissions.
The film at #2, The Hobbit: An Unexpected Journey, sold fewer tickets but grossed a higher revenue than 26 Years due to 3-D ticket surcharges. In just a single week the film recorded an impressive 1,529,519 admissions. Nonetheless The Hobbit: An Unexpected Journey opened to considerably less fanfare than Peter Jackson's earlier The Lord of the Rings films, which at the time of their release ranked as the best selling imported films in Korean box office history.
Slipping in at #3 was Whatcha Wearin, a Korean romantic comedy about two young professionals who meet by chance through a misdialed incidence of phone sex. The film marked the return of popular actress KIM A-joong to the big screen, six years after the wildly popular comedy 200 Pounds Beauty made her into a star. Blending elements of the romantic comedy and the sex comedy, Whatcha Wearin sold a respectable 1,399,508 tickets in its first two weeks on release.
Meanwhile the runaway hit A Werewolf Boy continued to exert its influence on the box office, as a special extended cut of the film was released on December 6. The 406,819 admissions recorded over this two-week period was enough to place the film at #5. The total accumulated box office for the original cut and the special extended cut is now just over 7 million admissions. The film by director JO Sung-hee tells the story of a family in the 1960s who take in an adolescent boy who appears to be a war orphan, but who turns out to be something else.

Three films managed to crack the top 10 despite being released on December 19, meaning that their totals in this chart represent only a single day on release, plus limited advance screenings. Hollywood musical Les Misérables in particular had a very strong opening with 343,078 admissions, boding well for its performance over the upcoming holiday season. A short ways behind it was Korean drama Love 911, a romance featuring top stars KO Soo and HAN Hyo-joo as emergency medical workers. Distributed by N.E.W., the film sold 199,978 tickets. Finally at #10 was comedy sequel Marrying the Mafia 5 - Return of Mafia(Working Title) with 166,048 admissions. The continuation of a series that began in 2002, this is the fifth film in 10 years for the lucrative string of gangster comedies.
Meanwhile among the films categorized by KOFIC as specialty releases, CHUNG Ji-young's National Security continues to lead the pack with a further 11,574 tickets, bringing its total to 331,899 admissions. Although its box office may not seem high compared to mainstream releases, the work did manage to earn back its limited budget.
Other specialty works currently on release include Korean film Paradox Circle with 7,166 admissions in two weeks; US independent film Our Idiot Brother with 26,547 admissions in three weeks; and French animated feature Tales of the Night with 9,094 admissions in three weeks. Cannes Palme d'Or winner Amour, which opened on December 19, has taken 2,474 admissions and is expected to perform well on the 6 screens that are currently showing it.