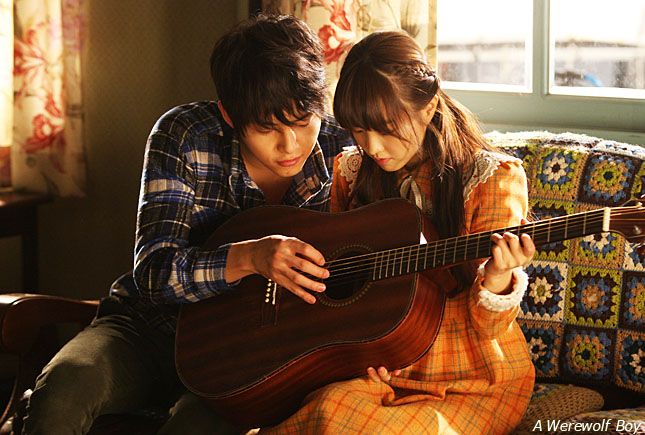 Yet another local film has taken the box office by storm, in a year of unprecedented commercial success for Korean cinema. A Werewolf Boy featuring young stars SONG Joong-ki and PARK Bo-young has steadily gained momentum since its release on October 31, selling a massive 3.9 million admissions (~$25.4 million) in two weeks. The film far outpaced any of its competitors, and given the fact that it sold 28% more tickets in its second weekend compared to its first, it is expected to continue putting up strong numbers for the foreseeable future.
The film also has the distinction of setting a new box office record for "suneung day,” the date on which high school seniors take their university entrance exams. Each year large numbers of students book tickets for films in the evening after the exam has finished, but A Werewolf Boy’s one-day score of 340,000 tickets outpaced the totals of any film in previous years.
Financed and distributed by CJ Entertainment, A Werewolf Boy is the first mainstream commercial feature by young director JO Sung-hee. JO first attracted attention for his short film Don't Step out of the House  (2009), which screened at Cannes and earned praised for its tense, atmospheric quality. He followed that up with the low-budget independent feature End of Animal (2010), which was imbued with a distinctive apocalyptic mood. For his first mainstream work, he teamed up with producer KIM Soo-jin of Bidangil Pictures, who previously scored a major box office hit in 2008 with The Chaser.
A Werewolf Boy, largely set in the 1960s, tells the story of a young woman in the countryside who discovers a strange, mute boy living on their property. Completed in early fall, the film first screened at the Toronto and Busan international film festival before opening locally on Halloween.
Although not a runaway success like A Werewolf Boy, the filmmakers behind new Korean release Confession of Murder have to be happy with the generally strong word of mouth and critical reviews it has received. Released on November 8, it has sold 1.04 million tickets in its first week -- almost as much as Skyfall took in a full two weeks. This work too is the first mainstream feature by a filmmaker who debuted in the independent sector. Director JEONG Byong-gil first drew notice for his 2008 documentary about Korean stunt men, Action Boys. His new film is about a man who writes a book taking responsibility for a string of murders, after the statute of limitations has expired.
A trio of new imported films also made their way onto the top ten chart, led by Canadian-French Loading co-production Upside Down at #6 with 154,938 admissions. Ben AFFLECK's critically acclaimed Argo made a comparatively light impact in Korea with 123,399 admissions, and UK drama Now is Good with Dakota FANNING took 51,116 admissions at #8.
Meanwhile, one Korean film that did not catch on with audiences as hoped was popular actress-turned-director KU Hye-sun's The Peach Tree. The story of two unusual twins who have passed 30 years without leaving the house of their father, the film took a disappointing 26,561 admissions despite the casting of well-known star CHO Seung-woo (Tazza: The High Rollers).