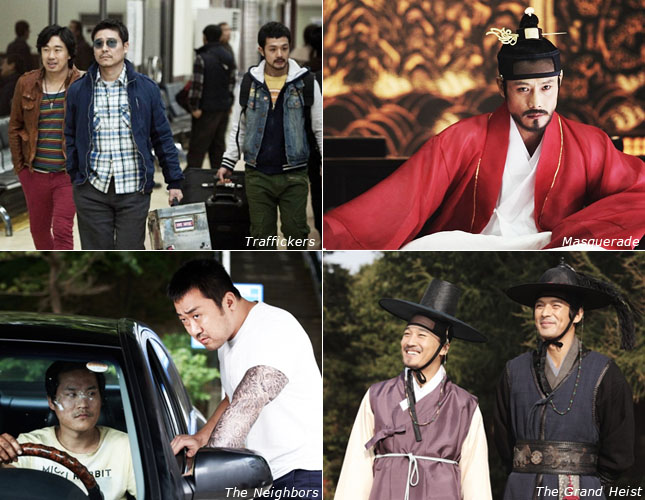 In the first half of September, Korean cinema continued its recent run of strength at the box office, with local features accounting for six of the top eight grossing films. Heading the pack was Traffickers, a grisly thriller about organ trafficking that took 1.15 million admissions over the time period in question.
Starring IM Chang-jung, CHOI Daniel, OH Dal-soo, MIN Hyo-lin and new actress JO Yun-hee, the film features a hard-hitting storyline inspired partly by real-life press reports about illegal organ deals gone wrong. Despite the film's dark subject matter, it has taken over 1.5 million admissions since its August 29 release.
The Korean film Masquerade may rank only at #3 in this chart with 860,000+ admissions, but that is because it was released only on September 13. Without question, this is the major commercial release of the month, and given its strong performance in its first few days on release, it is expected to become one of the top-selling films of the year.
Starring LEE Byung-hun in a dual role as the Joseon Dynasty king Gwang-hae and a jester recruited to serve as his body double, Masquerade has drawn praise for its accomplished acting, sure-handed direction, ambitious scale and commercial appeal. The response from mainstream viewers has been rapturous, with the film scoring 9.27 points out of 10 in viewer ratings at portal site Naver.
The #4 to #6 slots are taken up by Korean hit films released in July and August that are still hanging on at the box office. The Neighbor, a comic book adaptation about a series of murders that take place within a rundown apartment complex, sold 800,000 tickets in September and has taken 2.5 million admissions overall to date.
The ensemble piece was directed by screenwriter-turned-director KIM Hwi. At #5, period comedy The Grand Heist starring CHA Tae-hyun continued to add to its totals with an additional 525,000 tickets in September. In total it has taken 4.9 million admissions since August 8.
Meanwhile, CHOI Dong-hoon’s smash hit The Thieves has been inching closer to the all-time box office record for Korean films, currently held by BONG Joon-ho’s The Host (2006) with 13.02 million admissions. With a further 520,000 tickets sold in September, The Thieves currently stands at 12.9 million admissions, but it is rapidly losing momentum. With Avatar’s all-time record of 13.3 million admissions seemingly out of reach, attention is now turning to whether or not it will finally eclipse The Host's totals.
The film at #8 is an unusual case. KIM Ki-duk’s Pieta opened on September 6 to modest commercial returns of 8,672 admissions, however the announcement in the dawn hours of September 9 that the film had won Venice’s Golden Lion award -- Korea's most prestigious festival prize ever -- give the film a box office boost. In the coming week, widespread media coverage helped motivate more and more curious viewers to watch the film, and Pieta gradually rose in box office rankings (on September 12, the day before Masquerade was released, it was at #2).
Although the film divided audiences, most viewers were highly enthusiastic about the work, and so it further benefited from positive word-of-mouth. To date the film has passed its break-even point, and continues to perform well.
Among foreign releases, The Bourne Legacy -- which includes a few scenes shot in Seoul's Gangnam district -- performed strongest with 866,000 admissions in its first 10 days. Sylvester Stallone's The Expendables 2 took somewhat disappointing returns of 396,000 tickets, and Abraham Lincoln: Vampire Hunter also failed to impress with 244,000 admissions in September and 344,000 tickets overall. Resident Evil 5, released on September 13, had a decent but not spectacular opening that pushed it onto the top 10 list.