JOY to Start Shooting This February 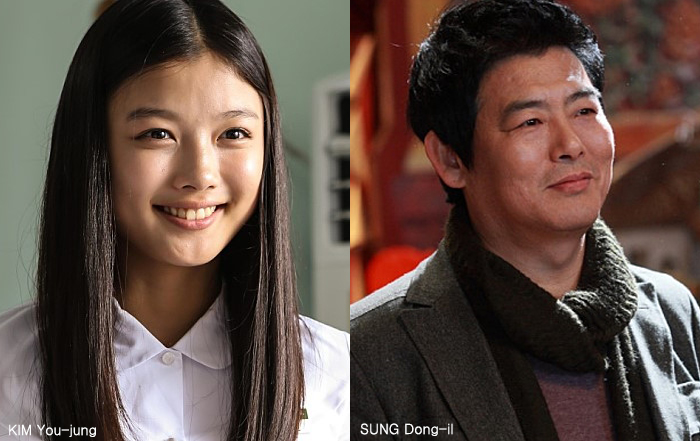 On January 5th, Sidus HQ announced that young actress KIM You-jung is in the last stages of confirming for her newest film Joy (working title), while SUNG Dong-il is also looking into taking on a main role. SUNG will play the father, while KIM will play the daughter in the film, a warm and comical story about a family. Newcomers PARK Eun-kyeong and LEE Dong-ha will direct the film.
KIM You-jung started her career in a supporting role for PARK Chan-wook’s Sympathy for Lady Vengeance (2005). She continued to build her experience through TV drama series as well as films like The Chaser (2008) and Commitment (2013), slowly landing larger roles until she became a lead in Thread of Lies.
SUNG Dong-il has become famous for being one of the best supporting actors in contemporary Korean cinema. He became known through the 2009 film Take Off, in which he played the coach to the Korean national ski jump team. He has recently become famous due to the TV reality show Dad! Where Are We Going?, where he goes on trips with his children.
Film Dorothy is producing and CGV Arthouse will be distributing the film. Shooting will commence in February.
Any copying, republication or redistribution of KOFIC's content is prohibited without prior consent of KOFIC.
Related People Related Films Related News