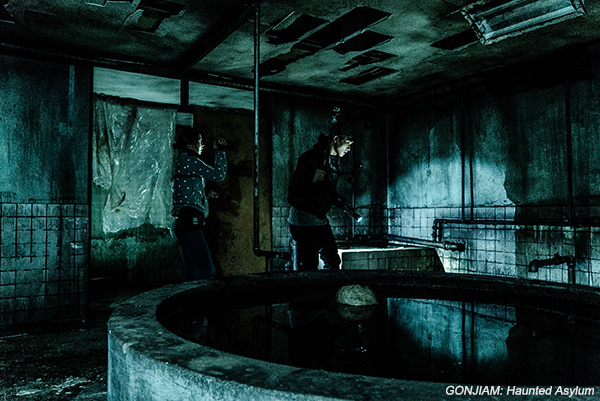 Korea’s found footage horror hit GONJIAM: Haunted Asylum (2018) is set to get the US remake treatment. The Los Angeles-based group Black Box Management is developing the update, which will be the first project to stem from a recently forged partnership with the Korean agency BH Entertainment.
GONJIAM: Haunted Asylum (2018) focuses on a group of young paranormal investigators who livestream themselves at the Gonjiam Psychiatric Hospital, an abandoned and supposedly haunted hospital which was once listed by CNN as one of the 10 freakiest places around the world.
Mike Dill and Lowell Shapiro, the partners of Black Box, wrote in a statement that “We are thankful to our friends at Showbox for putting their faith in us to develop Gonjiam for U.S. audiences. Korea has become a second home for us, and we are excited to help share the entertainment and culture that has captivated the world’s attention.”
Made on a low-budget and distributed by Showbox, GONJIAM: Haunted Asylum (2018) was a surprise hit in early 2018, drawing close to 2.7 million viewers (USD 17.61 million), an unusually large attendance record for a Korean horror film, second only to KIM Jee-woon’s A Tale of Two Sisters (2003), if we exclude certain genre hybrids such as TRAIN TO BUSAN (2016), THE WAILING (2016) and The Priests (2015).
GONJIAM: Haunted Asylum (2018) was the third film by JUNG Bum-shik, who co-directed the acclaimed Colonial Era horror Epitaph (2007) with JUNG Sik and later made the sex comedy Casa Amor; Exclusive for Ladies (2015), a remake of the 2010 Brazilian film Upside Down.
Any copying, republication or redistribution of KOFIC's content is prohibited without prior consent of KOFIC.
Related People Related Films Related Company