Jun 03, 2020
Music Biopic about YOO Jae-ha and KIM Hyun-sik to Lens in August 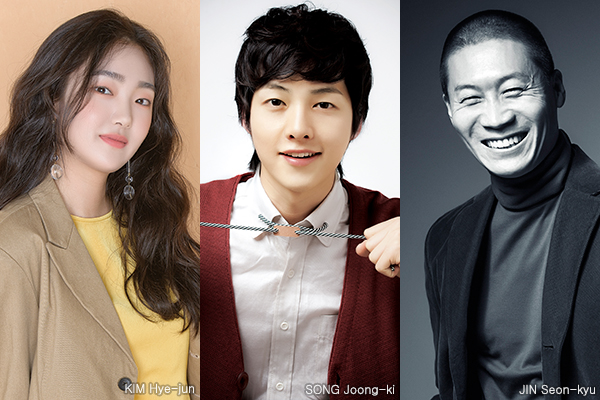 SONG Joong-ki and JIN Seon-kyu have been confirmed for the upcoming 1980s-set The Season of You and Me (translated title), a biopic about popular singers YOO Jae-ha and KIM Hyun-sik. KIM Hye-jun has also joined SONG and JIN in what will be the sophomore work of Miss & Mrs. Cops (2019) director JUNG Da-won.
The film will follow the working friendship between YOO Jae-ha (SONG Joong-ki) and KIM Hyun-sik (JIN Seon-kyu) as well as the relationship between YOO Jae-ha and his first love (KIM Hye-jun). Beloved singers YOO and KIM both died tragically young.
Superstar SONG is known for films such as A Werewolf Boy (2012) and The Battleship Island (2017), as well as world-famous drama series such as Descendants of the Sun. Earlier this year, he was in Colombia shooting the youth drama Bogota (Korean title) but owing to travel restrictions that arose during the Covid-19 pandemic, production had to be suspended and is scheduled to resume in 2021.
Character actor JIN broke out with a fiery supporting turn in 2017’s THE OUTLAWS and has appeared in many high-profile works since, including last year’s Extreme Job, the second most success film of all time at the Korean box office.
SONG and JIN recently co-starred in the big-budget Space Sweepers, billed as Korea’s first ever space drama, which is currently in post-production and awaiting release later this year.
New star KIM draw strong notices for her leading role in actor KIM Yun-seok’s directorial debut Another Child (2019). She also appeared in the horror hit Metamorphosis last summer and will soon be seen in the disaster drama Sinkhole.
The Season of You and Me is due to go before cameras this coming August. The film is being produced by Bidangil Pictures, which was responsible for SONG’s A Werewolf Boy (2012) and his upcoming film Space Sweepers, as well as last year’s Chuseok holiday hit The Bad Guys: Reign of Chaos.
Any copying, republication or redistribution of KOFIC's content is prohibited without prior consent of KOFIC.
Related People Related Films Related Company Related News