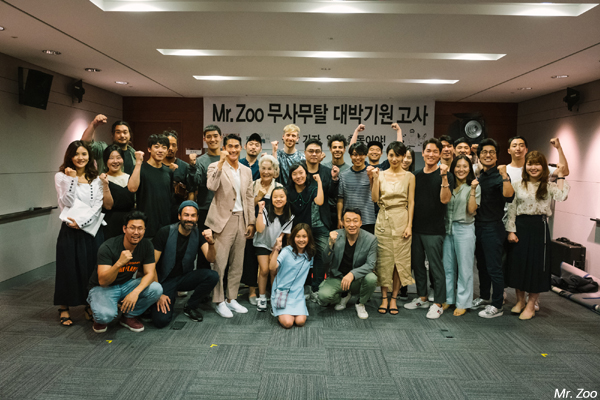 Following last year’s successful courtroom drama New Trial (2017), Director KIM Tae- is back on set with the new film Mr. Zoo (working title). Joining him are stars LEE Sung-min in a comedy about a man who communicates with animals.
LEE plays the ace Tae-, a government agent who develops the ability to talk with animals following an accident that occurred while on a mission guarding a special panda China.
The lead of such varied titles as the revenge drama Broken (2014), the small-town crime comedy The Sheriff in Town (2017) and the affair comedy What a Man Wants, LEE Sung-min has become one of the top actors in the country. Mr. Zoo will likely have to work around his schedule in August as the busy star is headlining two of the month’s major releases: YOON Jong-bin’s espionage drama The Spy Gone North and the thriller The Witness.
Also featuring in the cast are LEE’s The Sheriff in Town co-star BAE Jeong-, GAL So-won, known to audiences around the nation as the daughter in the smash hit Miracle in Cell No.7 (2013), and KIM Seo- of The Villainess (2017).
Director KIM’s New Trial welcomed over 2.4 million viewers last year and is also responsible for Educating Kidnappers (2006) and Another Family (2014). Ahead of filming, Director KIM revealed how glad he was to finally be embarking on production for an idea that he first conceived seven years ago.
Any copying, republication or redistribution of KOFIC's content is prohibited without prior consent of KOFIC.
Related People Related Films Related News