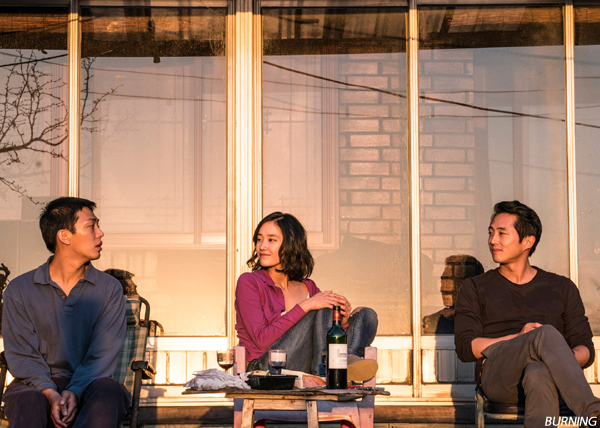 Korean auteurs LEE Chang-dong and Hong Sangsoo have been invited to the prestigious Karlovy Vary International Film Festival with their latest films, the arthouse dramas BURNING and Grass. This year’s 53rd edition of KVIFF kicks off on June 29.
Director LEE’s the first film after an eight-year break, BURNING, debuted in competition at the Cannes Film Festival in May, where it picked up the FIPRESCI Prize and the Vulcan Award for the Technical Artist. An adaption of MURAKAMI Haruki’s short story ‘Barn Burning’, the film stars YOO Ah-in (Veteran, 2015) as a poor writer who becomes infatuated with a young woman (played by newcomer JUN Jong-) even after she begins to meet the mysterious playboy Ben, played by Steven YEUN (Okja, 2017). BURNING, which is LEE’s fourth work invited to the festival, will screen in the ‘Horizons’ section.
Meanwhile, Director Hong teamed up with KIM Min-hee for the fifth time on his 22nd film Grass, which debuted in the ‘Forum’ section of this year’s Berlin International Film Festival. The black and white film, to be screened in the ‘Another View’ section in Karlovy Vary, features KIM as a writer who spends time in a cafe eavesdropping on other patrons, played by familiar Hong collaborators like JUNG Jin-young (Claire's Camera), KIM Sae- (The Day After, 2017) and SEO Young- (On the Beach at Night Alone, 2017). Grass marks Hong’s seventh invitation to KVIFF.
Any copying, republication or redistribution of KOFIC's content is prohibited without prior consent of KOFIC.
Related People Related Films Related News