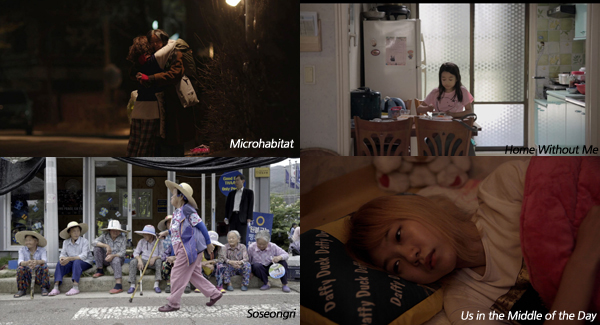 The 2017 Seoul Independent Film Festival (SIFF) released its programming for their festival which will take place in November. On October 20th, SIFF announced 38 films from the Competition section, 26 films in the New Choice section, 30 for Special Invitation, along with other special programming through a press release on their website (http://www.siff.or.kr/eng/main/main.html).
The festival’s executive quoted, “We received a total of 1,237 entries this year which is the most we’ve had in our history.” There will be 28 shorts (19 fictions, 6 animations, 1 experimental, 2 documentary) and 10 features (7 fictions, 3 documentaries) screenings at the festival. Programming includes KIM Hyeon-jeong’s Home Without Me (short), KIM Hye-jin’s Us in the Middle of the Day (short), JEON Go-woon’s Microhabitat (feature), and PARK Bae-il’s Soseongri (feature). SIFF also added, “For competition, we selected films that cover diverse themes with wide perspectives, while paying close attention in discovering independent films that are sensitive to reality and the current times.”
In the New Choice section, which spotlights new directors, KIM Bo-ram’s For Vagina’s Sake and GWON Gyung-won’s Courtesy to the Nation were selected. These documentaries are rooted in personal experiences that expand to a societal scale. Invited to the Special Invitations section are KIM So-young’s Goodbye My Love North Korea, MIN Byung-hun’s The Emperor, and JEONG Jae-eun’s Ecology in Concrete which are new films from renowned independent filmmakers. SIFF has also prepared special retrospective programming for the late HONG Ki-seon, and late PARK Jong-pil, as well as a program called “New Web Drama Showcase: Expansion of Making Independent Films”.
SIFF will run from November 30 until December 8 this year at the CGV Arthouse in Apgujeong-dong, independent film exhibitor Indie Space, and Seoul Art Cinema which specializes in cinematheques.
Any copying, republication or redistribution of KOFIC's content is prohibited without prior consent of KOFIC.
Related People Related Films Related Company