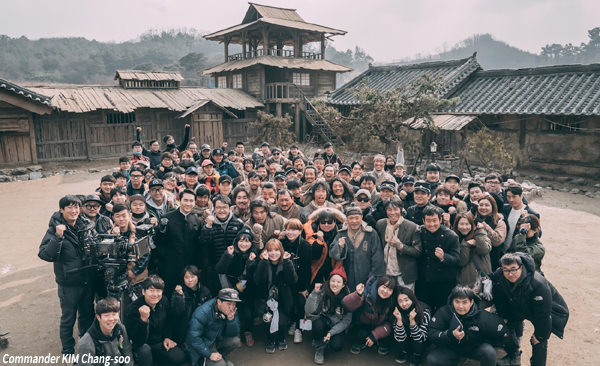 Following a three-month long shoot, the upcoming period film Commander KIM Chang-soo wrapped on January 31st. The production took place all over Korea, in regions such as Ganghwa-do, Hapcheon and Yeoju, with filming coming to a close on Hambaek Mountain in Gangwon-do Province.
CHO Jin-woong and SONG Seung-heon star in the film, which is the debut of director LEE Won-tae, who was a screenwriter on the 2015 period film The Magician and the producer of the 2011 horror romcom Spellbound.
A Hard Day (2014) star CHO, who will be back in theaters next month with the thriller Bluebeard, plays the eponymous character who is sent to prison as a young man for his role in the murder of an assassin and develops into a Korean independence fighter while behind bars after he witnesses the hardships that Korean people must endure.
Co-star SONG, who plays the villain in the film, was last seen in family comedy Wonderful Nightmare (2015) and the erotic melodrama Obsessed (2014). Joining the leads are JUNG Man-sik of Asura : The City of Madness, JUNG Jin-young (Pandora, 2016) and SIN Jeong-geun (Tunnel, 2016).
Currently in post-production, the KIDARI ENT-backed film will hit screens later this year.
Any copying, republication or redistribution of KOFIC's content is prohibited without prior consent of KOFIC.
Related People Related Films Related Company Related News