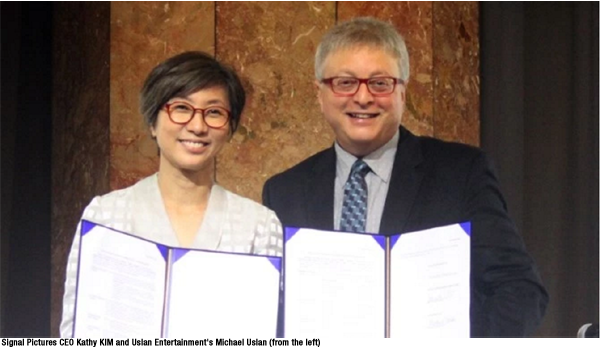 Michael Uslan, the executive producer of the ongoing Batman franchise, has teamed up with Korea’s Signal Entertainment Group in order to develop superhero and animation titles for Asian markets. Signal and Uslan Entertainment forged a pact in Seoul last Thursday.

With investment from Gemini Investment, Signal Entertainment Group launched Signal Pictures, which will be run by former CJ Entertainment CEO Kathy KIM. Meanwhile Jonathan H. KIM, the CEO of Hanmac Culture Corporation, will be the president of production.

Signal Pictures has become the biggest shareholder in Uslan Entertainment and together they plan to develop content with a focus on China. Uslan states that “We will be identifying successful IP and creating strong stories with deep characterizations to appeal to the global market. The content will possess uplifting and universal themes that will transcend not merely borders, but cultures as well.”

Their upcoming projects include East Dragon, West Dragon, a story about baseball legend Lou Gehrig, who suffered from ALS. The animation will be directed by Tony Bancroft, who previously made Disney’s Mulan; The Luckiest Man. An untitled project from Die Hard with a Vengeance scribe Jonathan Hensleigh is also in the works.

Prior to their partnering with Uslan, Signal and Hanmac have already collaborated on over 20 global projects, such as the upcoming Korea-China co-production Making Family. Starring HK Canto-pop star Aarif Rahman and Korean actress KIM Ha-neul, from Suspicious Customers (2011) director CHO Jin-mo, the film is scheduled for release on September 15th.