Work in Progress of THE SHAMAN SORCERESS to Screen in Annecy

May 31, 2016
Korean Films Galore for 130th Anniversary of Korean-French Ties 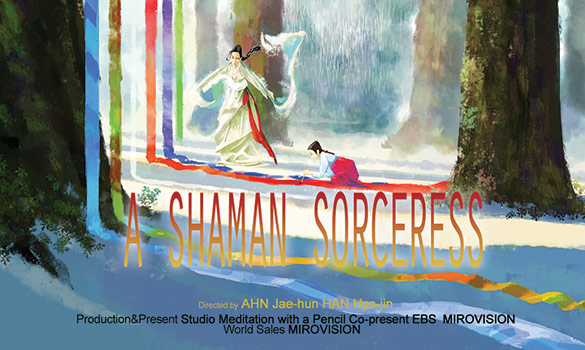 In addition to its selection of completed features, the 40th anniversary of the Annecy International Animation Film Festival is also staging a Work in Progress (WIP) section, which will include the Korean animated feature The Shaman Sorceress, from director AHN Jae-hoon and based on a novel by KIM Dong-ree written in 1936. The WIP is a section to give the audience the chance to discover the various stages of making feature films that are still in production.

Nominated for the Nobel Literature Prize in 1982, The Shaman Sorceress received global recognition for its keen insights on the trials and tribulations experienced during Korea’s rapid modernisation.

According to director AHN: "Different religions are still clashing around the world. The film explores why people adhere to religion and the meaning of it all by telling a story of an indigenous religion and external one that cause conflict within a family."

One of the top Korean animation filmmakers, AHN is also responsible for the films Green Days (2011) and The Road Called Life (2014), made through his production company Meditation With a Pencil.

In order to celebrate the 130th anniversary of diplomatic ties between France and Korea, the Annecy International Animation Film Festival is featuring a large amount of Korean content at this year’s event. This includes two completed features, YEON Sang-ho’s Seoul Station and LEE Sung-gang’s Kai (also produced by YEON), as well as two programs of Korean shorts that have made waves on the international scene during the last decade (whcih include JEONG Da-hee’s Man on the Chair, the Best Short Award winner at Annecy in 2014). New Korean shorts, such as JEONG’s The Empty and new titles from the Korean Academy of Film Arts (KAFA), will also be featured this year.

This year’s Annecy will take place between June 13th and 18th.