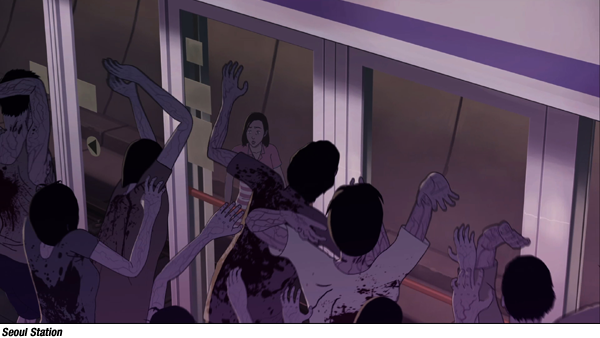 Acclaimed Korean animator YEON Sang-ho is involved in a pair of films traveling to the Annecy International Animation Film Festival next month. Screening in competition will be his third feature Seoul Station, while Kai, which he produced and was directed by LEE Sung-gang, will screen in out of competition.
Following the award-winning films The King of Pigs (2011) and The Fake (2013), YEON’s Seoul Station focuses on the breakout of a zombie apocalypse in Central Seoul. The film premiered at the Brussels International Fantastic Film Festival and will also be seen at the Fantasia and Sitges International Film Festivals later this year. The film’s narrative continues in YEON forthcoming live-action debut TRAIN TO BUSAN, which will premiere at the Cannes Film Festival on May 12th in a Midnight Screenings slot.
Kai is the new feature film by LEE Sung-gang, a representative director of the Korean animation field who previously helmed My Beautiful Girl, Mari (2002) and Yobi, The Five-Tailed Fox (2007). His new film recently debuted at the Jeonju International Film Festival.
Previously reported Korean films to screen in Annecy this year include Report About Death and the Korean Academy of Film Arts (KAFA) shorts Throttled and White Silence in competition, while JEONG Da-hee, after winning the Best Short Prize for Man on the Chair in 2014, also returns to the festival with The Empty. The festival will take place from June 13th to 18th.
Any copying, republication or redistribution of KOFIC's content is prohibited without prior consent of KOFIC.
Related People Related Films Related Company Related News