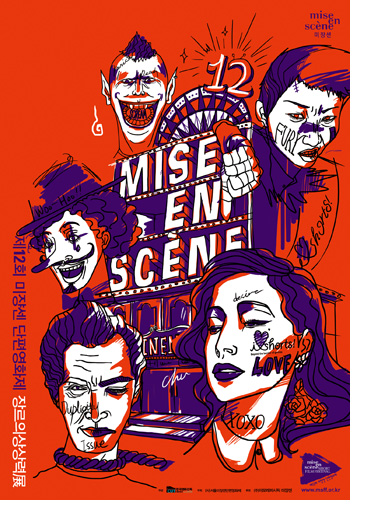 Jury members for the 12th Mise-en-scene Short Film Festival(MSFF) were announced. KWON Hyeok-jae, who worked as the assistant director for The City of Violence and Dachimawa Lee directed by RYOO Seung-wan, adapted Haeundae and directed Troubleshooter, is the head of the jury this year. KWON won the Best Film Award for The 40,000 Blows section of the 6th MSFF.
Big names from the Korean film scene are going to evaluate films in diverse sections. CHANG Hun, the director of Secret Reunion and The Front Line, and YOON Sung-hyun of Bleak Night will screen films in the A City of Sadness section. MIN Kyu-dong, who directed All About My Wife and Horror Stories, and PARK Jung-bum, who made The Journals of Musan, will take care of the A Short Film About Love section. The King of Comedy section will be evaluated by BONG Joon-ho, the director of Memories of Murder, The Host and the upcoming Snowpiercer, and LEE Yong-ju, of Possessed and Architecture 101. LEE Kyoung-mi, who directed Crush And Blush, and JO Sung-hee, the maker of End Of Animal and A Werewolf Boy, are the jury members of The Extreme Nightmare Section. Along with KWON Hyeok-jae, the head of jury, JANG Cheol-soo, the director of Bedevilled and Secretly Greatly will take care of The 40,000 Blows section.
What is most notable about this year’s jury is that old and new directors are well balanced. PARK Jung-bum, LEE Kyoung-mi JANG Cheol-soo were jury members last year and will be this year, too. KWON Hyeok-jae and LEE Yong-ju have been jury members for three consecutive years. MIN Kyu-dong will have evaluated films at the festival for four years in a row. CHANG Hun been a part of the jury since the 9th edition except for the 10th. YOON Sung-hyun became known when Children... and Drink and Confess screened at the competition section of the festival in 2008 and 2009 respectively. JO Sung-hee won the Grand Prize at the festival with Don’t Step Out of the House. They will watch 64 films in the competition section and decide which ones will win the Best Film Award and the Jury’s Special Award.

The 12th MSFF, expected to pioneer the future of Korean films, will be held from June 27 through July 3.
Any copying, republication or redistribution of KOFIC's content is prohibited without prior consent of KOFIC.
Related People Related Films