In Latin Amerian culture the number 15 is very symbolic. When girls reach their fifteenth birthday, they throw a big party. They invite all their friends and family and, aside from their wedding day, this is the most important social event in their lives. This coming of age ceremony resonates throughout Latin Amerian society on every level. There is no need to explain the meaning and importance of the 15th edition of Buenos Aires International Independent Film Festival (BAFICI).
As the new chief of BAFICI, artistic director Marcelo PANOZZO and his staff prepared this edition with great passion. On the 10th of April, BAFICI opened with NO (2012, Chile), a film that was nominated for an Academy Award, and finished its journey on the 21st of April. 473 films from 49 countries were invited and screened in 11 venues including cinemas, theaters, museums and parks across Buenos Aires. Ticket sales reached 85% from 1,004 screenings. The International Competition featured 20 films invited from various countries such as Germany, Argentina, Chile, Spain, U.S.A., France, Italy, Japan, England, and Switzerland. The nominees ranged from independent films and animation to other diverse genres, selected to cover a wide spectrum.
Four retrospectives were shown in this edition. One was for Julio BRESSANE from Brazil, an independent author with a very extensive filmography of more than 20 titles. Another featured Adolfo ARISTARAIN from Argentina, a critically acclaimed and significant director in the history of Latin American cinema. The selection of Austrian films with more than 30 titles including shorts, medium-lengths avant-garde films and features, was by far the most edgy section of the whole festival. Finally, and the most anticipated by local audiences, was the retrospective dedicated to the South Korean director HONG Sangsoo.
The winner of the Best (International) Film Award was Berberian Sound Studio (UK), by Peter STRICKLAND. His work is a strikingly original film that explores the mechanics of horror films, journeying into the mind of a sound technician.
In the new competitive section Vanguardia y Genero (Avant-garde and Genre), dedicated to the most experimental films, the award went to Arraianos (Spain), by Eloy ENCISO. The piece is a fiction made in a documentary style, using amateur actors and shot in a rural location. For the Argentinian section, the winner was an old alumnus of BAFICI, Santiago LOZA. The director received the award for his new film La Paz. The film centers on a troubled young man and his search for redemption.
BAFICI and Hong Sangsoo; Director from a distant land

If I were a programmer of BAFICI I would love to invite someone special for the 15th edition. I wouldn't necessarily choose a famous or great director, actor or critic but someone who I had a close connection with, someone meaningful. That is why I was emotional when The Korean Film Council (KOFIC) received an email from BAFICI last December. They asked KOFIC to collaborate in an exhibition of HONG Sangsoo’s work and were excited to invite him to Argentina, a country far away from Seoul. What made my heart move was that they choose the Korean director HONG Sangsoo from the hundreds of directors in the world and wanted to invite him to their momentous 15th birthday party.
Each time HONG has made a film, BAFICI has screened the premiere in Argentina. That means almost every year they presented one of his films because, as everybody knows, HONG makes a film per year without exception. According to the official catalogue of BAFICI, they have screened all of his films except Woman Is the Future of Man. You may know how difficult it has been to obtain screening permissions from his distribution company after HONG became a well-known director in Europe and America. Also I could imagine how hard they must have tried to make relations and keep in touch with the sales agency. This programming history shows that the festival has always had a special place for HONG. No need to explain why they would present a retrospective; Hong is already a part of BAFICI’s history. I still remember the day I went to their office and I saw HONG’s flight E-ticket on the wall of the main production office. General Manager Paula NIKILSON smiled brightly and I could feel how sincerely excited she was about his presence at the festival. 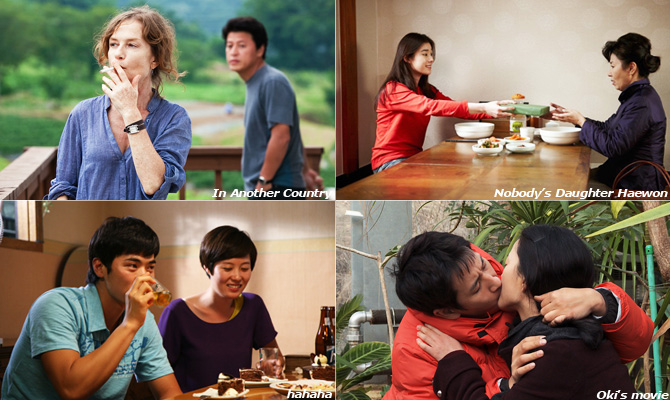 The retrospective presented 15 films including In Another Country and Nobody’s Daughter Haewon and one short from the Jeonju Digital Project. Furthermore BAFICI published the first book in Spanish about HONG in collaboration with, and supported by KOFIC. The title is 'El Director Desnudado por sus Pretendientes - El Cine de HONG Sangsoo' (The title of the book in English will be 'The Director Stripped by his Bachelors', playing with HONG’s film title Virgin Stripped Bare by Her Bachelors). Juan Manuel DOMINGUEZ was the editor of all the pieces that contain the perspectives of Argentinians, South Americans and critics from all around the world. The book also includes an interview with the director, made exclusively for it.
BAFICI made all of its preparations but unfortunately HONG couldn't make it because of a sudden injury. People thought that perhaps not many people would come to see his earlier works. However, when the vice-chairman of KOFIC went to the celebration screening for the 15th BAFICI and retrospective of HONG, the streets were streaming with people coming after work, causing huge traffic jams. The screenings were all almost full and during the credits there were huge applause and standing ovations, especially after the screening of Night And Day. Even without him the festival was still electrifying. If he had actually been able to attend, what could we have seen? I believe that the fans would have been even more hysterical than teenage girls yearning for a super idol like Justin BIEBER.
At the Korean reception during the festival, I had a conversation with Marcelo PANOZZO about what a great shame HONG's absence was. Now BAFICI has a good reason to invite HONG to Buenos Aires when he recovers and finishes his new film. The Day He Arrives, we will laugh, hahaha, in our knowledge of In another country while filming each other's Oki's movie during our night and day. I'm looking forward to the day that we can reminisce together even though we will each have our own individual memories.
Any copying, republication or redistribution of KOFIC's content is prohibited without prior consent of KOFIC.
Related People Related Films Related Company