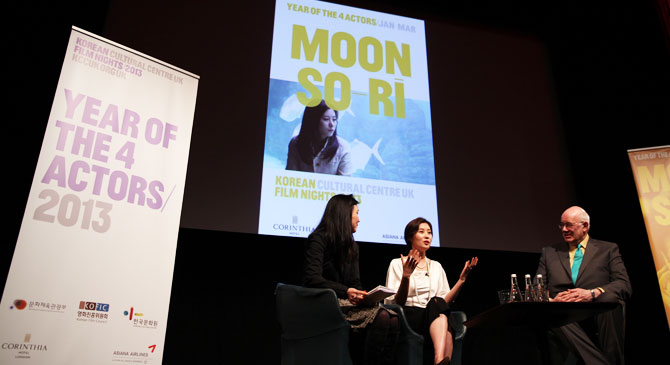 Fresh off its barnstorm 2012, when it staged its Year of 12 Directors during which it invited a prominent Korean director every month for a brief retrospective, the Korean Cultural Centre UK (KCCUK) has kicked off its similar 2013 program for actors in grand style. Acclaimed actress MOON So-ri was the first guest for the KCCUK’s Year of 4 Actors program.
MOON rose to prominence following her role in LEE Chang-dong’s contemporary classic Peppermint Candy (1999) and later cemented her status as one of the top international actresses by appearing in LEE’s subsequent film Oasis (2002) as a woman suffering from cerebral palsy. The role earned her the much-coveted Marcello Mastroianni Award for Best New Actor or Actress from the Venice International Film Festival.
She followed up this international success with acclaimed starring turns in IM Sang-soo’s A Good Lawyer’s Wife (2003) and The President’s Barber (2004), opposite SONG Kang-ho. She later began to collaborate with auteur HONG Sangsoo beginning with a voice performance in Like You Know It All (2009) before taking on major parts in HaHaHa (2010) and last year’s In Another Country. 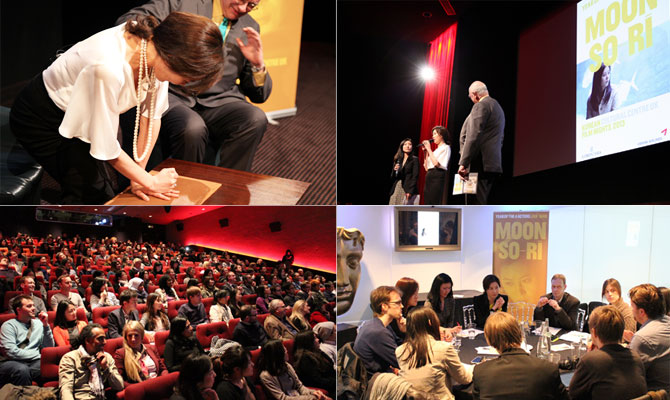 A retrospective of MOON’s career was held during the early months of the year in London, which included works such as The President’s Barber, Oasis, Peppermint Candy, A Good Lawyer’s Wife and Sagwa (2005). A final screening for HaHaHa took place in early April and MOON visited London to greet fans and take part in some special events.
The screening was followed by a Q&A session moderated by renowned critic and programmer Tony RAYNS. She also took part in a round table interview with various UK critics representing sites such as Hangul Celluloid, MiniMiniMovie, Korean Class Massive, London Korea Times, EasternKicks, Cine_Asia and Asian Global Impact. The session was translated by noted film professor CHOI Jin-hee, author of the book ‘The South Korean Film Renaissance’.
Later this year, Korean film fans in the UK will have the opportunity to meet other major Korean stars, including JEON Do-yeon, CHOI Min-shik and HA Jung-woo, as part of the KCCUK’s Year of 4 Actors event.
Any copying, republication or redistribution of KOFIC's content is prohibited without prior consent of KOFIC.
Related People Related Films