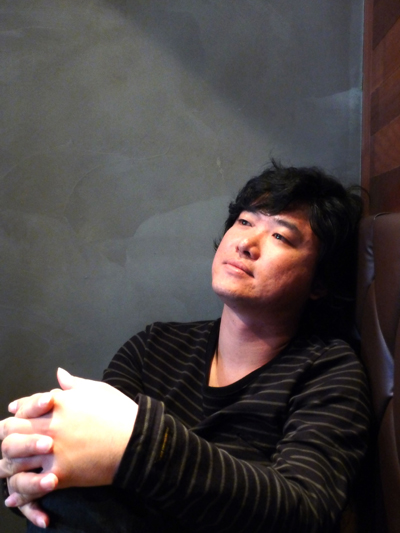 Up-and-coming Korean director Lim Woo-seong, whose <Scars> is screening in the San Sebastian International Film Festival Zabaltegi-New Directors Section, speaks to Cine21’s SHIN Dooyoung about his work. This is an excerpt from the full story which will be published in the October issue of <Korean Cinema Today>.
Director Lim Woo-seong, who adapted <Vegetarian> from HAN Gang’s novel of the same title, has once has once again made a film from a novel by Han. His second film <Scars> is based on <Baby Buddha> from Han Gang’s short story collection <Fruit of My Woman>. The film talks of the complicated married relationship between Sang-hyeop, a perfectionist newscaster and Sun-hee, a children’s book illustrator. Like <Vegetarian>, <Scars> is true to the images from the novel, describing the characters’ psychology in detail. The film has received funds from the Graduate School of Digital Image & Contents at Dongguk University, and Chungmuro Media Center’s Entertainment Group. Produced by Innovation Factory, the film’s international sales agent is M-line Distribution.
Q: Your new film is adapted from a Han Gang novel, too?
A: In 2008, I entered Donggguk University Graduate School. <Scars> was a project I submitted to a screenplay contest, a promotional event at school. The funding was about KW30 million and while thinking a small-scale story would be nice for such small amount of support, <Baby Buddha> crossed my mind. It seemed perfect for a chamber play with the focus on a couple. As I had been occupied with <Vegetarian> from 2005, <Scars> was a project that came out of nowhere. That same year, <Vegetarian> received KOFIC funding, so after finishing off just the shooting for <Scars> and two days of rest, I rushed into pre-production for <Vegetarian>. The film got me to the Busan and Sundance film festivals, and after a year I returned to editing <Scars>. It was like a going on road of spritual discipline and it took two years to complete. I felt like I wouldn’t be able to move onto the next step unless I finished <Scars>.

Q: Taking a novel and transferring it in detail onto the screen seems quite challenging.
A: As a director, it seems unfair to hear people say it is easy to adapt a novel into a film. A film critic wrote about <Vegetarian> that a film needs to designate all the non-designated domain of a novel. What this means is that readers each have different images of what a novel describes, and cinema is a process of designating one of those images. Say there is a description reading “The woman’s nose was sharp and her looks were sharp.” It isn’t easy to designate an actress who fits such description. Costumes, art and all need to be designated one by one, which is likewise a difficult job.
Q: In <Scars> actress PAK So-yeon plays Sun-hee and her role is significant. She is in almost all the scenes and carries the story by herself.
A: When we first started the project, I had just returned from studying abroad and had no experience working on Chungmuro films, so crew members introduced me to Pak So-yeon. Like CHAE Min-seo who was already working on losing weight even before she was cast for her role in <Vegetarian>, Pak, too, desperately wanted this part. I decided to cast her after a bit of consideration and I was quite happy with the result. When she was acting ill, she actually fell sick, too. There was a scene where her face turned pale and she almost seemed possessed.
Sept 23, 2011
Any copying, republication or redistribution of KOFIC's content is prohibited without prior consent of KOFIC.
Related People Related Films