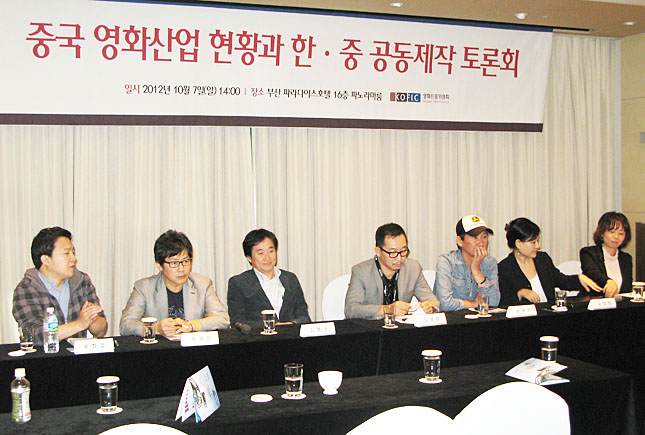 The Korean Film Council (KOFIC, Chairman: KIM Eui-suk) held the forum for current state of Chinese film industry and Korean-Chinese co-production at Panorama Room of Paradise Hotel at 2 pm on October 7th (Sun).
The forum was projected to help Korean filmmakers understand Chinese film industry and let them share opinions about co-production between the two countries. Since there have not been many opportunities for them to discuss Korean-Chinese co-production so far, interest of participants in the forum was great.
KIM Bo-yeon, head of film policy center of the KOFIC, which was the host of the forum, said, “It is envisaged that we can collect opinions of Korean cineastes about Korean-Chinese co-production to come up with a direction for policies.” For starters, KIM Su-hyeon, researcher at Film Policy Center, gave a presentation about current state of Chinese film industry and DO Seong-hui, adviser at Beijing Yìshēngchūnléi Films, explained about Chinese film policy.
Discussants at the forum were LEE Joo-ick, president of Boram Entertainment, Andy YOON, president of MoonWatcher, JUNG Yeong-beom, president of UAM,  WON Dong-yeon, president of REALies, KIM Hyeong-gu, professor at School of Film, TV & Multimedia, SON Seung-hyun, director of Digital IDEA.
They also joined the seminar for Korean-Chinese co-production that took place in China on August 30th and had a discussion with Chinese filmmakers about co-production. Cineastes from both countries had a chance to share their various eyes to co-production between two countries and common concerns about ‘Asian film’ at the seminar.
Participants of the forum held in the middle of the Busan International Film Festival (BIFF) focused on how Korean cineastes should prepare for Korean-Chinese co-production. Co-productions between Korean and China have been made in various ways including importation of manpower and business contract for post-production.
Experts such as directors AN Byung-ki and HUR Jin-ho recently dived into Chinese market and achieved their desired outcome. However in the long term, people have argued that individual promotions do not have huge effects on accumulative accomplishments. They have claimed that collaborative effort for packaging is essential like 6 Korean management companies held hands with each other and founded an independent firm for overseas business.
All the discussants agreed that an intensive and long-term consultative body for collaboration should be established so that Korean film producers can share information for cooperation and aim at common goals between Korean and China. In addition to that, they conversated that such discussions have not been made for years and yielded active results to look for means to run definite plans.
Any copying, republication or redistribution of KOFIC's content is prohibited without prior consent of KOFIC.
Related People Related Company