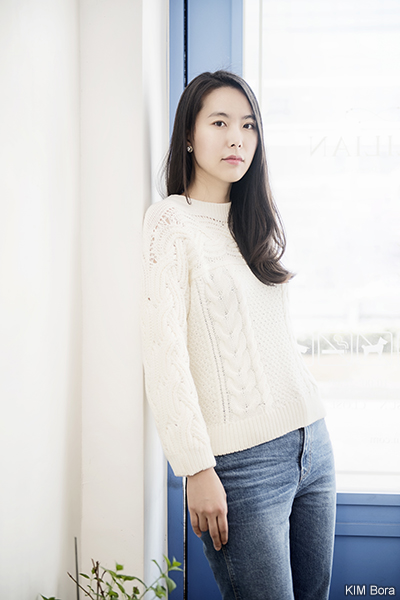 The movie House of Hummingbird, which is now called in Korea “2019’s best debut” with its 25 awards nabbed from film festivals all over the world, is finally getting a theatrical release. The film, which has just been released in Korea on August 29 and is about to hit theaters in Turkey, Sweden and the US, portrays the personal troubles that arise while growing up through the eighth-grade schooler Eun-hee. The second daughter of humble rice cake shop owners in a wealthy neighborhood of Gangnam, Seoul, Eun-hee flaps her wings tirelessly like a hummingbird desperate for affection and attention and wanders around in search of a reason to go on living. This week, we sit down with KIM Bora, who used the small universe called Eun-hee to depict the broader social atmosphere in 1994’s Korea.
House of Hummingbird is the feature-length version of the short film The Recorder Exam released in 2011. I am curious about the process through which The Recorder Exam was fleshed out to become your debut film House of Hummingbird?
The Recorder Exam is a story that features elementary schooler Eun-hee against the backdrop of the 1988 Summer Olympics in Seoul. People have worked together to host this international event and are ecstatic to receive such mark of recognition from the Western world, and it is in this social climate that a child named Eun-hee is preparing the biggest challenge of her own life, a recorder exam. As this is an uplifting story that watches over the journey of a child and the Olympic Games by drawing parallels between the two, many people asked me after the preview screenings how Eun-hee will turn out in the future. Seeing this character being accepted as if she was real filled me with joy, and by extension I became interested too in the way she would grow up. And so, using this as a starting point, I ended up making House of Hummingbird. The question that was asked with The Recorder Exam was, “Would we be capable to say of the small journey of a child that it is minor in comparison to a big national event?”, whereas for House of Hummingbird, I linked together the psychological breakdown of Eun-hee, who is now an eighth-grader, to the collapse of the Seongsu Bridge.
Eight-grader Eun-hee is the kind of protagonist we rarely see in Korean cinema.
From my understanding, there is already quite a lot of independent films with adolescent girls as protagonists. Women have been telling such stories all this time. Couldn’t it be that this period has become more visible as our society is changing? Most of the film markets all over the world are dominated by white men’s stories, and after them come white women, and then Asian men, in this order. Still, I think the reason other female directors are now getting noticed, like with House of Hummingbird, is that Korean society is finally ready to embrace women’s narratives. It might also be that it has finally come to people’s attention not for the particular narratives, but because we are at a special moment. 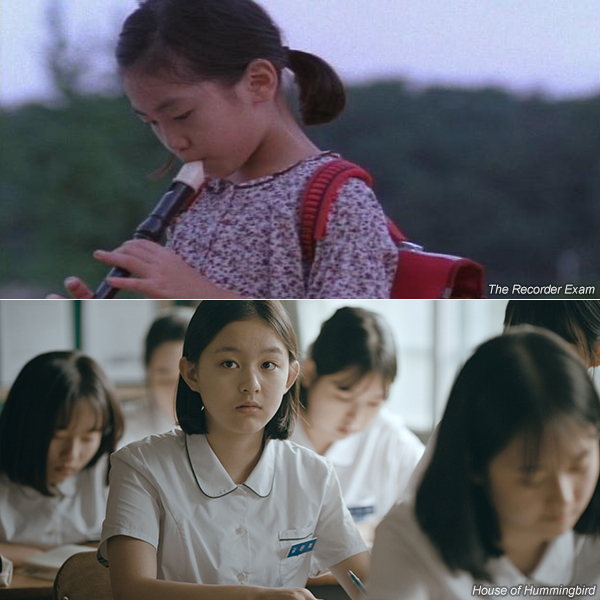 Where does the Korean title Hummingbird (translated) come from?
I found out by chance that some of the symbolic meanings of the hummingbird are things such as hope and love, the mindset of never giving up, endurance, and self-sufficiency. This really clicked with me. After that, I searched videos of hummingbirds flying around on YouTube, and seeing these vigorous movements of wings generated by such a small creature in slow-motion felt poetic. It occurred to me that such frailness bore a resemblance to Eun-hee’s journey and so I had settled for Hummingbird as the Korean title from the beginning.
How did you form and arrange the connections Eun-hee forges with the different characters?
I took great pains in the screenwriting and editing stage about when and how to structure them, no matter how trivial the scene may be. The first thing I did once I finished writing the scenario was to create index cards, with each type of scene designated by a color – pink for important scenes, yellow for normal scenes – and I changed the order and arrangement of the scenes several times. One of my criteria for the rhythm was that it had to be a “calm yet quivering movie”, and I arranged them in such a way that powerful scenes are always followed by calm ones. And in the editing room, I tried to weave them together more meticulously. Somebody commented to me that it was the first time a movie felt uneasy with such affection, and that sounded like a keen observation. It was exactly the feeling I was going for. I like the word “uncanny”, and I wanted to provide a chilling perspective on the strange sights found in everyday life.
What kind of deliberations regarding the photography did you have with cinematographer KANG Kuk-hyun, who was awarded Best Cinematography from the Tribeca Film Festival for his work on this film?
Cinematographer KANG Kuk-hyun said he wanted to make it with the utmost realism, and I, too, wanted to make it feel realistic, chilly. For the nighttime scenes, we initially used Edward YANG’s Yi Yi as a reference point. His night scenes with lush green backgrounds look a lot like our film, but in House of Hummingbird, the scenes that show the kids bouncing against the green background of an old apartment complex in the Gangnam area were composed with the hope it would bring a sense of nostalgia akin to the one found in Yi Yi. The scenes inside Eun-hee’s home, on the other hand, were getting darker. KANG Kuk-hyun said he wanted to convey the feelings of these moments when we lie down at home at dusk alone, that kind of oddly hazy feeling, you know? It is getting dark, the house becomes serene and the scenery outside the window turns into a warm and melancholic space. Also, for the interior spaces Eun-hee can escape to, we looked for places that had a lot of colorful lights. 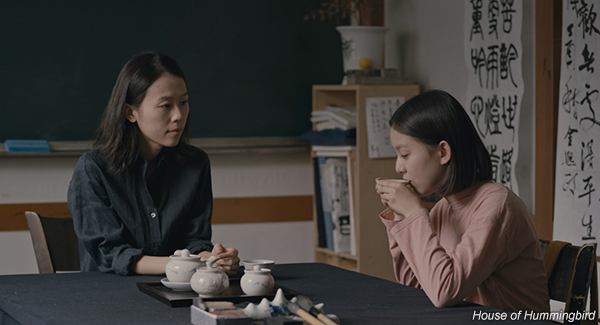 Production designer KIM Geun-a must have been an invaluable asset to recreate the period setting of 1994.
Even though it is a movie made with little budget, we didn’t want our representation of that period to be clumsy. That’s why it was essential to have an accurate art direction, with historical researches properly done. I took great care in finding Eun-hee’s yellow Benetton bag and the old furniture, even the bookshelf of Yeong-ji, the teacher. But at the same time, I couldn’t just lean on props to represent that period. Showing the period with props that matter, yes, but beyond that, my hope was for a rich and impressive art direction.
Was there any other rule you set for yourself while making this movie?
Yes, and it was to never depict any character negatively. I deliberately tried to apply the concept that all humans are multifaceted through the whole gallery of people in the film. I didn’t want to portray Eun-hee as just a victim suffering under the patriarchy, or the privileged father and brother as nothing more but assailants. Instead, I wanted to give more texture to the characters of the brother and the father in order to demonstrate that no one can win in the patriarchal system. Eun-hee isn’t always a nice and cute middle schooler either, is she? (laughs)
I would like to know more about the actor who plays Eun-hee, PARK Ji-hu. How did you meet?
I first met her in an audition. She told me she didn’t have an agency, but she saw the casting call and felt she was made for the role. During the audition, she played the scene where she has a quiet discussion with her teacher, Yeong-ji – this scene is the moment in the movie when Eun-hee’s sentiments are the most apparent, and PARK Ji-hu nailed it during the read-through right from the beginning. She was reading between the lines the exact intentions I had while writing the scenario. Seeing her going through the text delivering these simple lines with her own sense of tempo was everything I was hoping for.

Do you think of continuing with another film the story of Eun-hee as she gets older and gains in maturity?
At first, I didn’t even took the time to think about that, but since I have been asked the same question on a regular basis, it is getting more and more tempting. (laughs) I guess I will keep using the name Eun-hee, but the character might be slightly different. I’ve been a fan of comics artist KIM Eun-hee since childhood, so I am very fond of the name Eun-hee and I’m inclined to keep using it in my films.
You once said you wanted to constantly make stories about the yearning for love, so I was wondering what project you could have next, after being responsible for “2019’s best debut”?
Things rarely ever go according to plans (laughs), but I would like to try making a female-centered historical or war film, or even a sci-fi film, with a female perspective. The science-fiction genre in particular has never really been represented with a female perspective, so I am still currently gathering ideas. I haven’t made up my mind yet for my follow-up project, but as long as it guarantees that it won’t compromise my voice, it doesn’t whether it is a commercial film or an independent one. Whatever the environment, I want to stay true to my stories.
Any copying, republication or redistribution of KOFIC's content is prohibited without prior consent of KOFIC.
Related People Related Films Related News 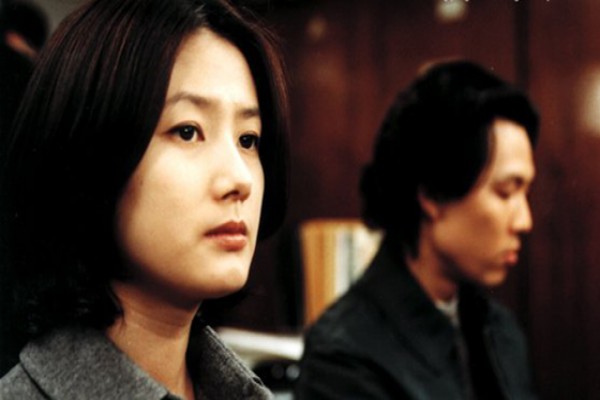 [News] HOUSE OF HUMMINGBIRD to Screen at Berlinale