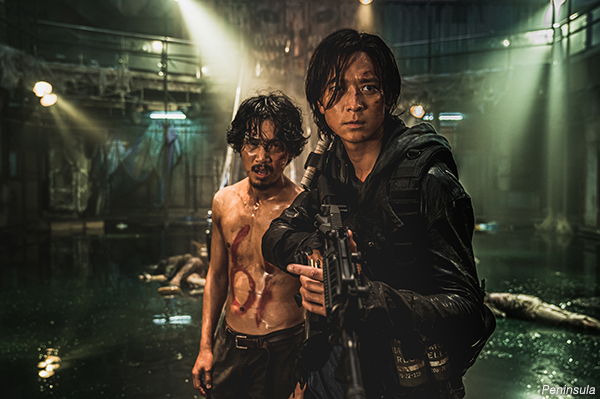 The summer box office season in Korea opened with the debut of the year’s most significant tentpole to date, with weekend admissions soaring over 300% week-on-week and topping the one million mark for the first time in the COVID-19 era. The local industry accounted for a gargantuan 95% of the 1.33 million admissions recorded.
There were many doubts as to whether the current market could support big-budget tentpoles but while other major summer releases delayed their launches, the hotly-anticipated TRAIN TO BUSAN (2016) sequel Peninsula stuck to its guns and attempted to reinvigorate the market with its July 15 launch.
Director YEON Sang-ho’s action-heavy dystopian chase film kicked off strong with 353,000 sales (USD million) on its opening day and maintained course for a weekend that saw it welcome 1.23 million (USD 9.19 million), which was 93% of all tickets over the frame. The film scored 1.8 million admissions (USD 13.2 million) in total over its first five days.
To put those figures into perspective, Peninsula’s opening weekend was a 75% improvement on #ALIVE’s start, the previous top debut in the COVID-19 Era, while its total surpassed #ALIVE’s early on Monday. However, in a market with severe seating restrictions and many viewers still lacking the desire to return to cinemas, the film’s debut was far below its predecessor’s. TRAIN TO BUSAN kicked off the summer season of 2016 with 3.2 million entries over its opening weekend and 5.32 million sales over the similar first five day stretch.
However, Peninsula has been performing strongly in other East Asian markets, where it opened day and date, giving it a convincing claim as the film that reignited the exhibition sector in the region. At home, the film won’t have any immediate competition as without Tenet opening this week the next major tentpole is scheduled for July 29. However the reaction from general public has been mixed, casting doubt on whether it will still be able to draw in major crowds once fresh competition does materialize.
With Peninsula sucking up all the air in the market, it was slim pickings for everything else as holdovers experienced major drops across the board. #ALIVE claimed second place after crashing 85%, adding 23,000 viewers (USD 150,000), which raised its total to 1.85 million entries (USD 13 million). Bombshell was down 66%, with another 21,000 sales (USD 158,000), which lifted its haul to 1.39 million spectators (USD 984,000). Slowing 59% was Pixar’s Onward with another 9,000 seats (USD 65,000) filled and a new total of 391,000 admissions (USD 2.81 million). Chinese melodrama Better Days was only down 46%, adding 6,000 tickets (USD 47,000), which pushed it to 31,000 entries (USD 224,000).
Without a big title on the way, Peninsula will have no trouble repeating on the charts, but holdovers will have to compete with a re-release of last year’s surprise behemoth Aladdin and the Japanese drama Blue Hour, featuring Korean star SHIM Eun-kyoung.
Any copying, republication or redistribution of KOFIC's content is prohibited without prior consent of KOFIC.
Related People Related Films Related News