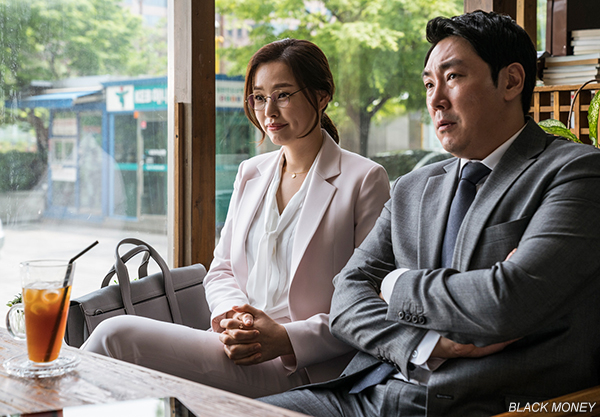 Local films continued to drum up solid business, as a new champion and holdovers gave the Korean industry a 74% edge. All told, 1.82 million tickets were sold over the past frame, a figure that will rise significantly this coming weekend as one of the biggest films of the year opens in a few days.
Veteran filmmaker CHUNG Ji-young has returned to theatres seven years after National Security with the corruption thriller BLACK MONEY, which posted an impressive debut with 781,000 entries (USD 5.94 million). Starring CHO Jin-woong and LEE Ha-nee, the film has accrued 1.05 million admissions (USD 7.81 million) in five days.
Off 59% from its start a week ago was the local action-thriller The Divine Move 2: The Wrathful, which filled another 365,000 seats (USD 2.79 million) to lift its total to a respectable 1.84 million sales (USD 13.63 million).
On its way out of theaters, the local hit KIM JI-YOUNG, BORN 1982 eased another 56% as it sold another 153,000 tickets (USD 1.13 million). The female-driven drama has taken in a stellar 3.49 million viewers (USD 24.74 million) since its launch.
In week three, franchise sequel Terminator: Dark Fate was down 64% as 136,000 spectators (USD 1.02 million) were counted over the weekend, raising its total to 2.31 million entries (USD 16.62 million).
Animated title The Addams Family slowed 53% during its second session, during which it attracted 89,000 moviegoers (USD 606,000), for a running total of 319,000 sales (USD 2.2 million).
Outside of the top five, LIM Dae-hyung’s indie drama Moonlit Winter, which was the closing film of the Busan International Film Festival this year, had a solid debut in ninth place with 24,000 sales (USD 162,000) over the weekend and 35,000 entries (USD 236,000) since its Thursday launch.
Korean films have had a strong few weeks on the charts but all the local holdovers are going to have to take a step back this coming weekend as the Disney giant Frozen 2 enters the marketplace. With close to half a million tickets presold as of Monday morning (83% of all sales), the animated sequel is poised to be a box office giant. Its predecessor is one of only seven foreign films to crack the 10 million admissions barrier in Korea.
Any copying, republication or redistribution of KOFIC's content is prohibited without prior consent of KOFIC.
Related People Related Films Related Company Related News