THE GANGSTER, THE COP, THE DEVIL Beat Up the Competition

May 21, 2019
AVENGERS: ENDGAME Becomes Most Viewed Foreign Film of All Time 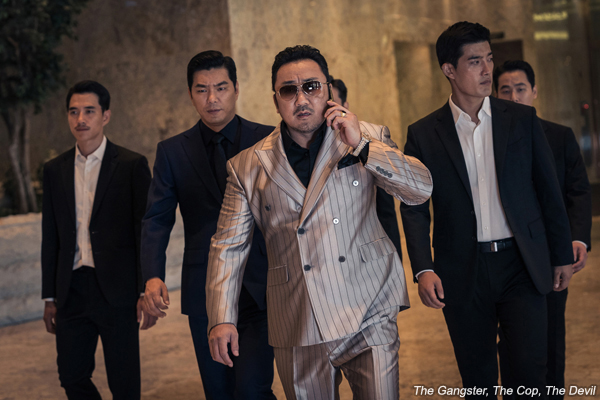 Adding to some robust holdovers, a pair of new local offerings boosted business by about 20% over last week and gave the domestic industry a healthy 75% command of box office sales, which totaled 2.3 million.
Earning the first place rank ahead of its international premiere at the Cannes Film Festival this week was the Don LEE-led (aka MA Dong-seok) gangster drama and serial killer thriller combo The Gangster, The Cop, The Devil which came out of the gate strong with 1.11 million viewers (USD 8.46 million) over the weekend and a sturdy 1.48 million entries (USD 11 million) recorded to date. With solid user scores and a Cannes marketing bump on the way in the coming days, tickets stiles should keep on spinning for a while.
Though it was down another 52% as it continued to shed theaters, Avengers: Endgame reached a major new milestone over the weekend, as it became the most successful foreign film at the Korean box office, unseating Avatar, which had held the position for close to a decade. The Marvel tentpole sold another 389,000 tickets (USD 3.07 million), pushing its gigantic haul to 13.45 million (USD 98.65 million), which is now the fifth best ever score of all time at the Korean box office, though it appears that the top four ranks, all held by local titles, are safe for the moment.
After receiving a strong reaction, particularly from female viewers, local buddy cop comedy Miss & Mrs. Cops was down just 28% in its sophomore frame, as its filled another 372,000 seats (USD 2.72 million), giving it 1.23 million sales (USD 8.82 million) to date.
Meanwhile, losing just under half its audience in week two was Pokemon Detective Pikachu, which scored 123,000 entries (USD 858,000) as its total rose to 635,000 admissions (USD 4.44 million).
Struggling in its debut was the legal comedy-drama Juror 8 with MOON So-ri and PARK Hyung-sik, which mustered just 120,000 spectators (USD 810,000) over three days and 192,000 entries (USD 1.31 million) over its first five days despite an appreciative response from critics.
Several holdovers are well positioned to maintain their streaks this coming week, while both Disney’s Aladdin update and the homegrown legal drama My First Client will also be vying for attention.
Any copying, republication or redistribution of KOFIC's content is prohibited without prior consent of KOFIC.
Related People Related Films Related News