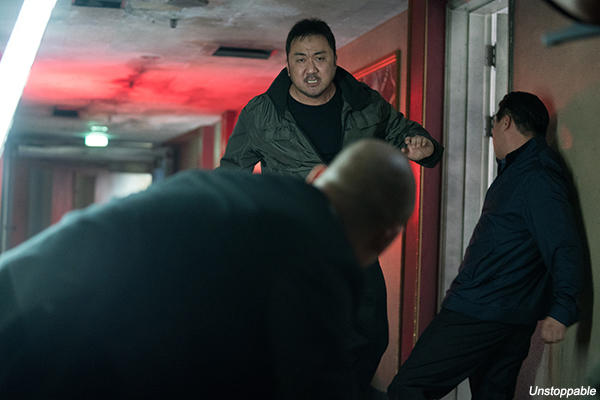 Even with a four-week old film occupying the top rank, business was very healthy at the Korean box office, which recorded a 35% weekly rise. Local fare also improved but was still shy of a majority with a 42% market share, versus 56% for Hollywood.
After opening in second place at the end of October, the Freddy MERCURY biopic Bohemian Rhapsody has pulled off the rare feat of seeing its audience increase for three successive weeks. Now in its fourth weekend, the film has finally clinched the top rank on the charts after winning the weekend with 955,000 entries (USD 7.65 million), following a 17% week-on-week rise. With 4.64 million tickets (USD 36.27 million) sold and plenty more on the way, the word-of-mouth hit should crack the yearly top ten at some point this week.
Don LEE (aka MA Dong-seok) leads a picture for the third time in as many months (after THE SOUL-MATE and The Villagers) with new action-thriller Unstoppable. Despite a better reception than The Villagers earlier this month, the film had to settle for second place. The film did so with a solid 701,000 viewers (USD 5.47 million) over the weekend, and 921,000 spectators (USD 7.06 million) over four days, but it will have a hard time in the face of stiff competition going forward.
Dropping 65% from its debut was the Warner Bros tent-pole Fantastic Beasts: Crimes of Grindelwald which recorded 358,000 sales (USD 2.82 million) over the weekend, growing its admissions tally to 2.17 million (USD 16.87 million), a solid figure but well short of its predecessor, which finished its run with close to 4.7 million admissions in the market.
Slowing 46% in its fourth weekend was the local hit Intimate Strangers, which banked another 267,000 sales (USD 2.09 million). With 4.89 million entries (USD 36.43 million) recorded to date, the Lotte Entertainment title is the fifth most well-attended local film of the year, and should rise to third on that list within the week.
Opening in fifth place was Lasse HALLSTRÖM’s family-friendly drama A Dog’s Purpose with 36,000 viewers (USD 286,000) and 45,000 spectators (USD 355,000) since opening on Thursday.
Following several middling local thrillers that have failed to light up the charts, CJ Entertainment is wading into the action with its star-studded financial thriller Default. Featuring KIM Hye-soo, YOO Ah-in and French star Vincent CASSEL, the film should have little trouble conquering the charts this weekend. Meanwhile, look to Bohemian Rhapsody to continue drawing in major crowds.
Any copying, republication or redistribution of KOFIC's content is prohibited without prior consent of KOFIC.
Related People Related Films Related Company Related News