ON YOUR WEDDING DAY Off to Fairy Tale Start 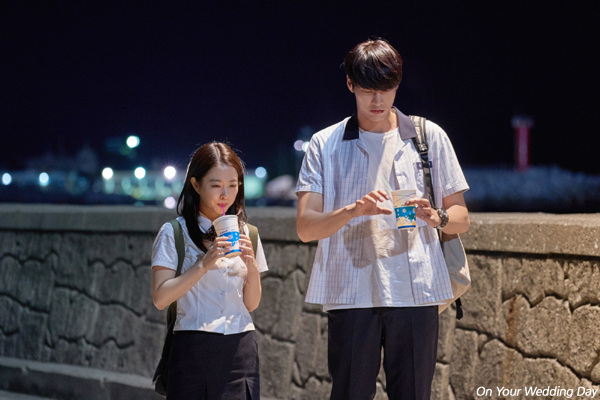 Another local number one debut gave the domestic industry the four top spots on the chart and lifted the Korean market share to 75% for this past weekend. With the summer season continuing to slow down, overall admissions receded to 2.32 million.
After topping the charts on its opening day last Wednesday with a solid but unexceptional 99,000 tickets (USD 713,000), local romantic offering On Your Wedding Day, a vehicle for popular stars KIM Young- and Bo-young, steadily rose throughout the week and finished the weekend with 694,000 sales (USD 5.34 million), with 901,000 entries (USD 7.06 million) recorded in total over its first five days. After this impressive start, strong word of mouth and a low budget should ensure the film a quick path to profitability.
Slowing 47% in the second weekend was last week’s champ The Witness. With another 433,000 viewers (USD 3.53 million), the Korean thriller has so far banked a healthy 2.2 million admissions (USD 17.13 million).
A spot behind after a 59% slide was The Spy Gone North with 317,000 spectators (USD 2.6 million), giving the Korean espionage drama 4.66 million viewers (USD 36.19 million) to date.
Just underneath with 290,000 new entries (USD 2.31 million) was summer smash Along with the Gods: The Last 49 Days, which has risen to the 12th spot on the all-time top-selling Korean films list with 11.88 million admissions (USD 89.38 million) banked to date.
Mamma Mia! Here We Go Again held on well with a 35% ease with 193,000 new sales (USD 1.58 million) pushing its total to a strong 1.96 million spectators (USD 15.15 million).
Opening in sixth place was US action-comedy The Spy Who Dumped Me with 105,000 entries (USD 882,000) over the weekend and 164,000 viewers (USD 1.32 million) since its Wednesday bow.
Yet another local film is poised to top the charts this coming week as Lotte Entertainment release the political drama High Society with Hae-il and Su Ae. Also drumming up business on the pre-sales chart are a re-release of the space drama hit Gravity and the US thriller Searching, featuring Korean-American stars John in the lead.
Any copying, republication or redistribution of KOFIC's content is prohibited without prior consent of KOFIC.
Related People Related Films Related Company