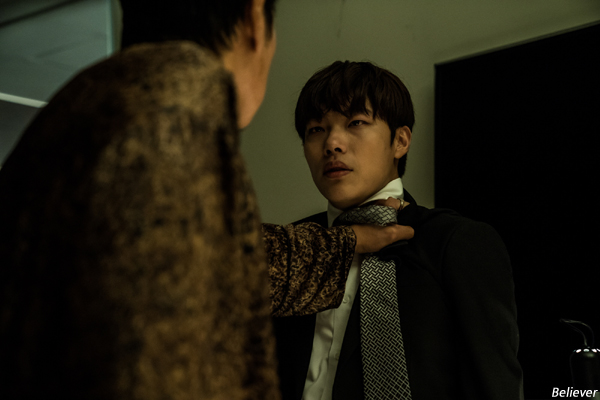 The local industry scored its first market share win at the box office since early April as a Korean thriller fended off heavy Hollywood competition, including a major holdover and a big-budget non-starter. Overall, 2.01 viewers crowded into theaters, with Korean films snapping up 57% of sales.
Director Hae-young’s fourth film Believer, a remake of Johnny TO’s mainland Chinese thriller Drug War with CHO Jin-, RYU Jun- and KIM Joo-hyuk in his final screen role, opened early on Tuesday for the Buddha’s Birthday holiday with a smashing 377,000 viewers (USD 3.14 million) and went on to top the weekend with 1.09 million spectators (USD 9.22 million) for a promising early total of 1.8 million admissions (USD 14.86 million).
After a strong debut, Deadpool 2 stumbled in its sophomore frame, down 69% as it recorded another 421,000 entries (USD 3.68 million), raising its total to 3.16 million sales (USD 26.91 million). However, the film is still on track to exceed the 3.3 million viewer lifetime total of its predecessor early this week.
Down 60% as it makes its way out of theaters was Avengers: Infinity War with another 108,000 seats filled (USD 890,000), pushing its total just past 11 million admissions (USD 91.4 million).
While Disney recently scored the second highest total for a foreign film ever in the Korean market with their latest Marvel title, their Star Wars franchise continued to struggle in the market, as Solo: A Star Wars Story opened with a disastrous 104,000 viewers (USD 931,000), which was almost 35 times smaller than Avengers’ debut a month ago. In four days the film has brought in just 125,000 spectators (USD 1.12 million).
Opening close behind in fifth place was the latest Blumhouse horror-thriller Truth or Dare, which kicked off with 95,000 sales (USD 783,000) in its debut weekend, and 183,000 entries (USD 1.48 million) in total since its Tuesday launch.
is well positioned to stay atop the charts this coming week as a variety of smaller titles will enter theaters. The next big release will be Jurassic World: Kingdom, out on June 6.
Any copying, republication or redistribution of KOFIC's content is prohibited without prior consent of KOFIC.
Related People Related Films Related News